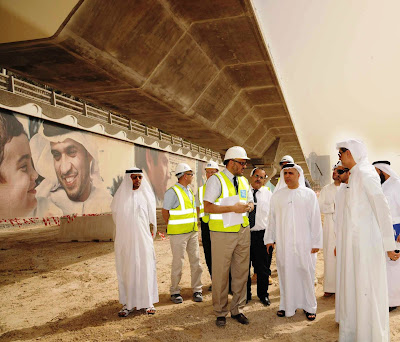 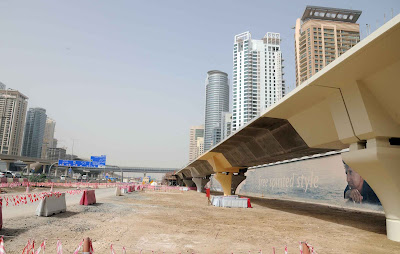 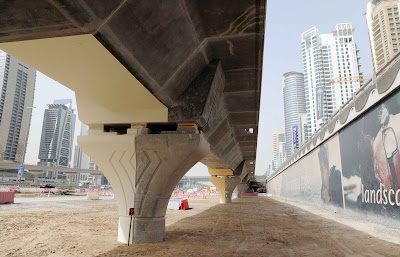 The Roads & Transport Authority – Mohammed Al Munji:
His Excellency Mattar Al Tayer, Chairman of the Board and Executive Director of the Roads & Transport Authority (RTA), announced the full completion of construction works in the elevated track of Al Safouh Tramway project, adding that the completion rate hit 95% in the design of the transit systems, 62% in the design of civil works, and 50% in utility lines diversion works, such that the overall project completion rate reached about 43%.

Al Tayer made these remarks in a site visit to inspect the work progress in the project during which he was accompanied by the CEO of the Rail Agency Adnan Al Hammadi, and several directors & engineers. Al Tayer inspected the work process in various parts of the project, particularly the elevated track and the utility lines diversion points. Al Tayer was briefed by Al Hammadi about the completion rates in various components of the project which stretches 14.7 km alongside Al Safouh Road. The initial Phase envisages the construction of a 10.7 km-long track starting from Dubai Marina and stretching up to the Mall of the Emirates Station. The Tram network comprises 19 passenger stations 13 of which are covered under Phase I and spread across activity and population density areas along the tram route.

The tram fleet comprises 8 trams in the initial phase, and 17 trams will be added in Phase II such that the total number of operating trams will be 25 trams. The Tram is expected to lift about 5,000 passengers per hour per direction, and each tram measures 44 meters in length and has a capacity to accommodate about 300 passengers. The Tram has a First Class (Gold Suite) and one cabin designated for ladies & children as well as a Silver Class car. The internal finishing of carriages & stations are deluxe and charming, and the tram is fitted with the latest technologies in the transmission and display of entertainment materials. The passenger lounge extends 44 meters and is equipped with Automatic Fare Collections systems.

Highlighting the tram project Al Hammadi said: “Work in the project, which is being constructed by Alstom-Besix Consortium, is progressing according to the approved schedule, and the initial phase of the project is set for completion in the first half of 2014. The tram track basically extends at-grade level along Al Sufouh Road but rises in an elevated section across certain areas of Dubai Marina for reasons dictated by urban structures of the locality. It links up with the metro system in three stations along Sheikh Zayed Road via footbridges to ease the transit and exchange of passengers between the two modes. Al Sufouh Tram will also be linked with the Monorail of The Palm Jumeirah at the entrance of the Palm from Al Sufouh Road to facilitate passenger traffic between districts served by both projects.

Al Sufouh Tram is considered the world’s first tramway project powered by an electric supply system extending along the track, thus obviating the need for catenary cables. It is also the world's first tramway that uses platform screen doors in passenger stations fully aligned with the tram's doors opening and shutting mechanism, providing maximum convenience, safety and security for passengers, and at the same time protecting the efficiency of the air-conditioning quality in the interior of both stations and carriages from the external climatic effects.