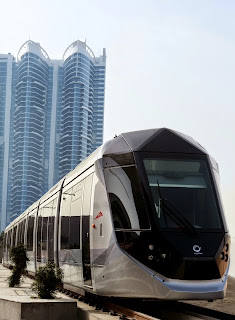 A delivery ahead of schedule in Dubai

This full system project - that was assigned to Alstom by Dubai Roads and Transport Authority (RTA) - was launched to foster multimodal transportation use and to reduce traffic congestion and pollution. This first Tramway in the entire Gulf region is expected to serve about 27,000 passengers per day and is anticipated to hit about 66 000 by 2020.

His Excellency, Mattar Al Tayer, Chairman of the Board and Executive Director of the Roads and Transport Authority (RTA), said: “The Dubai Tram is a brainchild of His Highness. Sheikh Mohammed bin Rashid Al Maktoum, Vice-President and Prime Minister of the UAE and Ruler of Dubai, to provide an advanced transport system. When RTA was created in 2005, His Highness ordered to have an integrated and comprehensive solution for the area in order to accommodate the huge urbanization projects in the neighborhood, particularly the JBR and the Marina and Al Sufouh area ”.

“The tram for Dubai, which we are proud to have handed over ahead of schedule, illustrates Alstom’s strategy to serve all markets with a complete range of solutions while demonstrating our leading position in tramway systems. Thanks to Alstom and RTA’s close collaboration on the project, Dubai’s citizens can now travel aboard one of the most sophisticated and comfortable tram in the world” said Henri Poupart-Lafarge, president of Alstom Transport.

The Dubai Tramway includes many Alstom’s technological breakthrough. It is the first tram in the world able to run in temperatures of up to 50 °C and to withstand harsh climate conditions such as humidity and sandy atmosphere. Equipped with APS ground-level power supply, the system is also the first in the world to be catenary-free all along the line which is 10.6 km long and counts 11 stations. This technology enables perfect integration of the tramway into the cityscape. Lastly, it is the first line to be equipped with air-conditioned stations and automatic platform screen doors.

The Dubai Tram offers high-end comfort. The Citadis tram is 44 metres long and can accommodate 408 passengers in “gold”, “silver” and “women & children” classes. The tram is equipped with real-time passenger information and video broadcasting. To better reflect the city’s image, Citadis tram of Dubai has a distinctive diamond-shaped styling on the front end.

The Dubai Tramway is the eighth system delivered by Alstom in a decade. With seven others under implementation worldwide  including the Lusail tram in Qatar, Alstom is the world leader in tramway systems.

About Alstom
Alstom is a global leader in the world of power generation, power transmission and rail infrastructure and sets the benchmark for innovative and environmentally friendly technologies. Alstom builds the fastest train and the highest capacity automated metro in the world, provides turnkey integrated power plant solutions and associated services for a wide variety of energy sources, including hydro, nuclear, gas, coal and wind, and offers a wide range of solutions for power transmission, with a focus on smart grids. The Group employs 93,000 people in around 100 countries. It had sales of over €20 billion and booked close to €24 billion in orders in 2012/13.