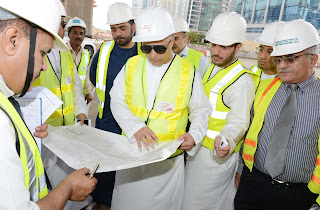 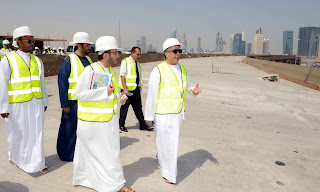 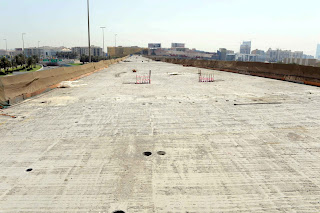 The project, which costs about Dh719 m, is slated for opening next November

The Roads & Transport Authority – Mohammed Al Munji:
H.E. Mattar Al Tayer, Chairman of the Board and Executive Director of the Roads and Transport Authority (RTA), announced that completion rate has touched 90 per cent in the Trade Center Bridges Project at Zaabeel, and added that the project, which has a cost tag of 719.37 million dirham, is expected to be opened in the second half of November 2013.

Al Tayer was briefed by engineers about the work progress in the project which encompasses the construction of 22 bridges of precast concrete units forming a corridor spanning 4250 meters comprising two lanes in each direction together with a concrete ramp extending 120 meters added to serve the traffic outbound to Al Maktoum Bridge.

Al Tayer inspected the project components where construction works have been completed in most interchanges with main roads such as Sheikh Zayed Road, Sheikh Rashid Road, and Zabeel 2 Road. Al Tayer directed to assess the level of traffic safety in the Bridge before being opened, particularly in the approaches of the World Trade Center, and erect cautionary signage for motorists to reduce speed well before vehicles start descending from the Bridge. He also directed to study placing directive signs in the approach to the Bridge to help motorists identify their destinations properly.

"The Trade Center Bridges Project is by far the largest phase of the Parallel Roads Project; which is one of the massive road projects undertaken by the RTA aimed at linking the Western Parallel Road with the Sheikh Rashid bin Saeed Road and Street 312 passing by the World Trade Center. The Project also serves the traffic in the opposite direction of Street 312 passing by the Trade Center heading towards Al Maktoum and Al Garhoud Bridges as well as the Dubai–Al Ain Road. It also includes improving the signalized junctions at the intersection of the Trade Center in addition to infrastructure and lighting works.

He continued: “The RTA had accomplished key phases of the Parallel Roads Project, the last of which was the opening of vital sectors of the Improvement of the Parallel Roads Project at JAFZA South, extending from the northern part of the road leading to Al Houdh R/A up to the 10th Interchange on the Sheikh Zayed Road. Project works completed also included improvement of the Eastern & Western Parallel Roads in both directions within Jebel Ali Industrial Area, and JAFZA South, through constructing six bridges and four footbridges to ease the pressure on Sheikh Zayed Rd, and the Industrial Area, besides establishing a link between the investment and economic zones of the Dubai World’s projects, connecting them with the surrounding roads, besides linking Jebel Ali Port with Al Maktoum International Airport, and providing a road leading to the Expo Road of JAFZA. Last May, the RTA opened the service road leading to the Expo Road, and last December it opened a lane linking Al Maktoum Airport with JAFZA South. 12 light signals have been established in the Parallel Roads Project in the Business Bay area; linking Sheikh Zayed Rd, Al Khail Rd and the Business Bay district, and offering a smooth traffic flow in Emaar and Business Bay districts through the Eastern and Western Parallel Roads.

It is worth-mentioning that in September 2011 the RTA opened Phase III of the Parallel Roads Project serving sprawling urban developments in areas such as Jebel Ali Racecourse, Emirates Hills, Springs, Meadows, Jumeirah Islands and Jumeirah Park. The Road, which extends about 20 km, constitutes 14% of the total Parallel Roads Project, and comprises 3 to 4 lanes in each direction as well as 6 bridges and 3 underpasses crossing the eastern and western roads. The RTA had earlier opened Phase I of the Parallel Roads Project including the construction of roads at Al Barsha, and Al Qouz Industrial & Residential Areas extending from Hessa Road to the south up to Meydan Road to the north in a sector extending 15 km in the Eastern Parallel Road and 18 km in the Western Parallel Road, comprising three lanes in each direction. The roads intersect several arterial & express roads such as Umm Suqeim Road, Latifa bit Hamdnan Road in addition to arterial & local roads, including 25 signalized junctions. Work is up and running in Phase III at Jumeirah Lakes Towers where completion rate has exceeded 75 per cent, and construction works in the project which costs 450 million dirham are set for full completion by the end of this year.