Aquaventure at Atlantis, The Palm Takes Trip Advisor Crown as Best Waterpark in the Middle East and One of the Top Five in the World 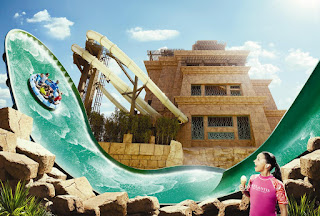 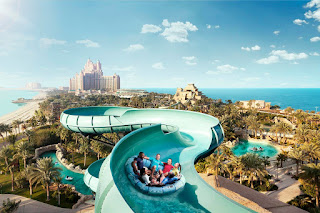 Aquaventure at Atlantis, The Palm Takes Trip Advisor Crown as Best Waterpark in the Middle East and One of the Top Five in the World

Dubai, United Arab Emirates, 27 July 2015 – With school holidays’ in mid flow, families can experience one of the top waterpark attractions in the world, without even having to leave the UAE. Aquaventure at Atlantis, The Palm has been voted the best waterpark in the Middle East and the fifth best in the world, in the TripAdvisor Travellers' Choice Waterparks Awards. The influential travel site this week announced the accolade is based on millions of traveller reviews.

The 17 hectare beachfront waterpark, situated on the apex of The Palm’s crescent boasts two enormous towers packed with rides including the world’s largest diameter slide, the world’s first vertical banking family ride with a double hump at the end, the first double slide within a slide experience, the world’s first known zipline circuit to be integrated into a waterpark tower and unique marine animal interactions with rays and sharks.

Within Dubai, it's Aquaventure that takes the lead with more TripAdvisor Travellers' Choice Awards for waterparks than any other waterpark in the country.

The TripAdvisor report features over 1,000 photos taken by happy Aquaventure visitors, along with thousands of positive reviews, which refer to the park in glowing terms due to the vast range of exhilarating rides available to suit all of the family, no matter the age or thrill level desired.

Scott.Deisley, Vice President of Operations at Aquaventure said: ‘We are thrilled that this excellent ranking by Trip Advisor endorses Aquaventure’s global standing, especially as it comes from thousands of happy guests that have passed through our door. We thank each and every person that has taken the time to share their amazing experience with us.’

The high rating comes on the heels of Atlantis’ investment of around US$ 27 million whereby a second 40-meter Tower of Poseidon was added, to give the waterpark a record breaking offering to guests, both regionally and globally.

Aquaventure was ranked fifth in a list that featured Siam Park in Spain, Beach Park in Brazil, Waterbom Bali in Indonesia and Disney's Typhoon Lagoon Water Park in Florida in first to fourth respectively.http://www.tripadvisor.com/TravelersChoice-Attractions-cWaterParks-g1

Complimentary to guests of Atlantis, The Palm and welcoming thousands of visitors from across the world each day, Aquaventure contains 18 million litres of fresh water used to power eleven thrilling waterslides and a 2.3 kilometre river ride with tidal waves and pools, water rapids and white water chargers. Using the latest technology,Aquaventure is capable of using over 750,000 litres per minute to create water surges and waves with swells reaching almost 1 metre high.  Guests are propelled through the lushly landscaped waterscape, never having to leave their inner tubes as innovative water escalators carry participants up slide towers and down through rapids.

About Atlantis, The Palm, Dubai
Atlantis, The Palm is the first entertainment resort destination in the region and located at the centre of the crescent of The Palm in Dubai. Opened in September 2008, the unique ocean-themed resort features a variety of marine and entertainment attractions, as well as 17 hectares of waterscape amusement at Aquaventure Waterpark, all within a 46 hectare site. It is home to one of the largest open-air marine habitats in the world, with over 65,000 marine animals in lagoons and displays including The Lost Chambers Aquarium, a maze of underwater corridors and passageways providing a journey through ancient Atlantis. Aquaventure features 18 million litres of fresh water used to power thrilling waterslides, a 2.3 kilometre river ride with tidal waves and pools, water rapids and white water chargers. Atlantis, The Palm is also known as the culinary destination in the region with a collection of world-renowned restaurants including Nobu and Ronda Locatelli. The resort boasts an impressive collection of luxury boutiques and shops as well as extensive meeting and convention facilities.
Posted by Imre Solt at 9:38 AM