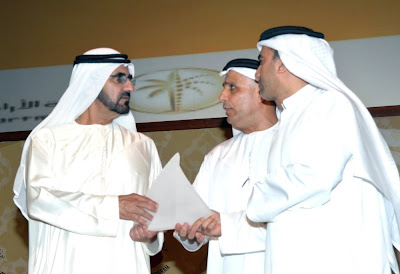 H.E. Mattar Al Tayer, Chairman of the Board and Executive Director of Roads & Transport Authority (RTA), expressed deep gratitude to HH Sheikh Mohammed bin Rashid Al Maktoum, Vice-President and Prime Minister of the UAE and Ruler of Dubai, for lending support and patronage of the pioneer drive of excellence in the public sector. Such a drive has well been illustrated, thanks to the establishment of Dubai Government Excellence Program (DGEP); which was established in 1997 as an integrated government excellence program across the globe and a driving force to bring about a quality shift in the performance of government departments & units, based on well established universal standards.

HH stresses that every government employee shoulders a huge responsibility to work wholeheartedly to sustain the drive of successes & unprecedented achievements; a legacy passed on from ancestors and we expect our current generations to carry on.

“Thanks to the wise directives of HH Sheikh Mohammed bin Rashid Al Maktoum, Vice-President and Prime Minister of the UAE and Ruler of Dubai, the incessant follow-up of HH Sheikh Hamdan bin Mohammed bin Rashid Al Maktoum, Dubai Crown Prince, and the dedicated efforts & team spirit of its employees, RTA was able to uplift the performance level, keep abreast of successive events in various fields, and introduce new administrative concepts. RTA could raise the bar of excellence standards through developing its human resources, fostering the spirit of creativity & innovation across the board, providing a good working environment, and advocating the team spirit; which was culminated in extensive achievements, delivery of projects that left impressive results across the emirate, and constructive participation in all categories of DGEP.

“Accordingly, RTA landed the Distinguished Management Initiative Award through Metro Stations Naming Rights Project; which marks a transition of the traditional administrative methods, and the first investment model that generates feasible revenues contributing to the development of public transport infrastructure worldwide. Moreover, it enhances the partnership with the private sector, and fosters the culture of knowledge, interaction, constructive competition, and innovative concepts.

“RTA stance to embrace high technology and innovations as a means of bolstering the performance of traffic mobility in the emirate, as reflected in its vision of providing Safe & Smooth Transport for All, enabled RTA to bag the prestigious Distinguished Technological Project Award through the Toll Gate System (Salik); which is part of integrated solutions developed by the RTA to ease traffic congestion.

“Thanks to the dedicated and diligent efforts of its employees, RTA scooped other Awards under various excellence categories of DGEP Awards; namely: Kawthar Kazim, Director of Human Resources & Development Dep’t was honoured with Distinguished Female Employee Award in recognition of her efforts in bringing about a quality shift in the method & management of HR at the RTA; a transition marking a breakaway from the traditional method to a target-geared management. Noura Al Abdouli, also from Human Resources & Development Dep’t, clinched Distinguished New Employee Award in recognition of her multiple initiatives & excellent achievements made.

Al Tayer hailed the efforts of the winning employees and praised their assiduous efforts to excel in their jobs; which was culminated in scooping the prestigious awards. Winning these awards will be a great impetus for the RTA to proceed ahead with the administrative & technical advancement and pursue the tradition of excellence.