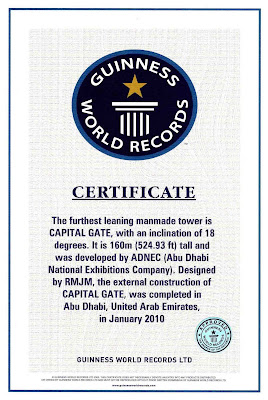 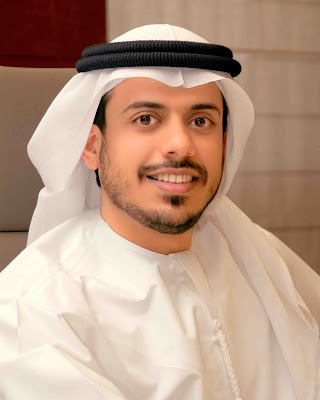 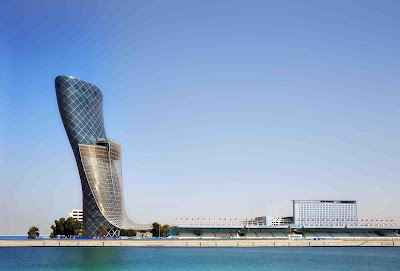 CAPITAL GATE (www.capitalgate.ae) has been built to lean 18 degrees westwards - more than four times that of the world famous Leaning Tower of Pisa – and, earned the Guinness recognition after rigorous evaluation by the Awards Committee since January 2010, when the exterior of the 160-metre (524.9 ft), 35-storey tower was completed.

Commenting on CAPITAL GATE’s record-breaking achievement, His Excellency Sheikh Sultan Bin Tahnoon Al Nahyan, ADNEC’s Chairman said: “CAPITAL GATE is a landmark development for Abu Dhabi and with this recognition the tower takes its place among the world’s great buildings. It is a signature building which speaks to the fore-sight of the emirate”.

CAPITAL GATE’s floor plates are stacked vertically up to the 12th storey after which, they are staggered over each other by between 300mm to 1400mm giving rise to the tower’s dramatic lean.

The tower features other innovative construction techniques including the world’s first known use of a ‘pre-cambered’ core, which contains more than 15,000 cubic metres of concrete reinforced with 10,000 tons of steel. The core, deliberately built slightly off centre, has straightened as the building has risen, compressing the concrete and giving it strength, and moving into (vertical) position as the weight of the floors has been added.

“CAPITAL GATE has been a true design-and-build project from the very start. There have been numerous challenges, which I am pleased to say we have surmounted thanks to a structured partnering programme and the hard work and commitment of everyone involved. Both ADNEC and our partners have thoroughly enjoyed the opportunity to create an iconic structure which is not only distinctive in appearance but also extremely functional,” said His Excellency Ali Saeed Bin Harmal Al Dhaheri, ADNEC’s Managing Director.

When fully complete by the end of this year, CAPITAL GATE will house the 5-star Hyatt Capital Gate hotel as well as approximately 20,000sqm of premium office space.

Peter Fulton, Managing Director, Hyatt International, South West Asia commented, “This is indeed a proud day for all of us involved with CAPITAL GATE. We are fortunate to have been given the opportunity to showcase our hotel in one of the Middle East’s most significant developments. Along with our partners at ADNEC, we hope to be able to offer a unique and authentic guest experience that will complement this iconic structure, making it the preferred address in Abu Dhabi for the discerning traveller.”

CAPITAL GATE was designed by international architecture firm RMJM and is adjacent to the Abu Dhabi National Exhibition Centre within ADNEC’s Capital Centre.

“RMJM has a 40 year history of designing and delivering world class buildings in the Middle East. The award of this world record substantiates this and puts both CAPITAL GATE and Abu Dhabi firmly on the world stage, and at the cutting edge of global architecture. RMJM are delighted to have been instrumental in this pioneering achievement,” said Nick Haston, RMJM Middle East CEO

Besides CAPITAL GATE’S gravity-defying lean and its pre-cambered core, the tower has several other elements that enhance its reputation as one of the world’s most distinctive projects:
• Each room is different as is each pane of façade glass and every interior angle.
• CAPITAL GATE’s shell comprises a super-strong exo-skeleton called the diagrid that carries all the weight of the floors while also providing an unobstructed floor plate precluding the need for pillars or internal beams. Other high-profile buildings that use diagrid technology include New York’s Hearst Tower, the Swiss Re building (‘The Gherkin’) in London and Beijing’s CCTV tower.
• CAPITAL GATE’s double-glazed façade achieves greater energy efficiency with waste air being pre-cooled between the inner and outer façades, before being expelled.
• The tower’s façade glass is of low emissivity and is the first time it has been used in the UAE. It keeps the building’s interior cool and eliminates glare, while maintaining transparency.
• The distinctive stainless steel ‘splash’ that descends from the 19th floor, is a design element and a shading device that eliminates over 30 percent of the sun’s heat before it reaches the building. The splash also twists around the building towards the south to shield the tower as much as possible from direct sunlight.
• CAPITAL GATE’s 19th storey outdoor swimming pool has an unrivalled panoramic view.
• A cantilevered tea lounge overhangs the tower’s exterior, 80m above the ground.
• CAPITAL GATE also has an internal diagrid that has been used to create a tapered, 60m high atrium.
• The tower’s foundation is a dense mesh of reinforced steel above 490 piles, drilled 20 - 30 meters underground.

CAPITAL GATE’s status as one of the world’s most complex engineering projects has been further endorsed by a recent exclusive National Geographic television documentary. The ‘Megastructures’ programme devoted to the project – ‘The Leaning Tower of Abu Dhabi’ - has been translated into 44 languages and will be broadcast in 166 countries reaching a potential audience of 200 million viewers. ‘The Leaning Tower of Abu Dhabi’ is due to air in the Middle East next month.


- Approximately 6.5 million man-hours spent onsite up to April 2010, since construction commenced in 2007