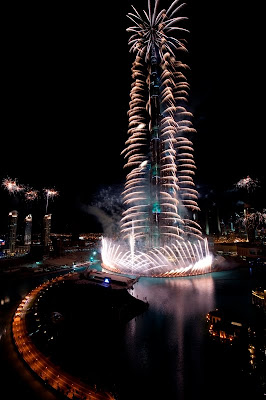 The 828 metres (2,716.5 ft) high Burj Khalifa was the centre of attention for a global audience as it marked New Year’s Eve with a spectacular laser-lights-fireworks show, telecast live to over 2 billion people around the world.

Close to half a million Dubai residents and visitors witnessed the New Year’s Eve Gala from Burj Park, an island set on The Burj Lake opposite Burj Khalifa, and from several other vantage points across Downtown Dubai.

The celebration, which also marked the first anniversary of the grand inauguration of Burj Khalifa, enveloped the whole of Downtown Dubai, the 500-acre mega development, which is anchored by the tower. The community was a sea of humanity, as people arrived to witness the spectacle several hours in advance.

Described as ‘The Centre of Now,’ for its diverse showcase of high-end lifestyle destinations including malls, hotels, homes and offices, Downtown Dubai created a stunning spectacle with lights and fog effects.

To mark the New Year’s Eve Gala, The Dubai Fountain, the world’s tallest performing fountain overlooking Burj Khalifa, also hosted a special fire-water-music show, where fire elements and water sprouts were seamlessly integrated for the first time in the region.

Mr Mohamed Alabbar, Chairman, Emaar Properties, said: “The New Year’s Eve Gala at Burj Khalifa has positioned Dubai as the must-visit destination to celebrate new beginnings. The show easily qualified as of the finest spectacles anywhere in the world, and we are confident that in the coming years, Dubai will be the place that visitors from across the world will choose to celebrate the New Year.”

In addition to the fireworks spectacle, set to the melody of a specially composed music, there were display screens across Downtown Dubai for visitors to enjoy live telecasts of New Year’s Eve celebrations from different parts of the world.

Visitors were also entertained with the after-party held at At the Top, Burj Khalifa, the world’s tallest observation deck with an outdoor terrace – most recently voted as ‘Best Tourist Attraction at the Best in Dubai’ event. Guests attending the At the Top party had the privilege of celebrating the first day of the New Year taking in magnificent views of the city at night.

A fully-established community with world-class homes, commercial space and the world’s first Armani Hotel Dubai, Burj Khalifa is now ‘A Living Wonder.’ It anchors Downtown Dubai, the most definitive lifestyle development in the city, which also features two malls - The Dubai Mall, the world’s largest shopping and entertainment destination, and Souk Al Bahar.