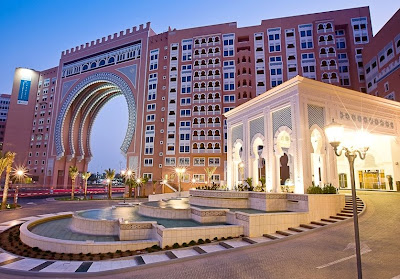 MICE given chance to unlock the gate

The 396 bedroom Ibn Battuta Gate Hotel, Mövenpick Hotels & Resorts’ latest luxury business property in the UAE, is going to give trade visitors to the Gulf Incentive Business Travel & Meetings (GIBTM) Exhibition, a real incentive of their own – a chance to win a luxury apartment for a year.
GIBTM which takes place at the Abu Dhabi National Exhibition Centre on 28-30 March is the region’s premier platform for the MICE industry (meetings, incentives, conferences & exhibitions).

The Ibn Battuta Hotel which opened in October 2010, is currently half-way through a six million dirham, four month ‘unlock the gate’ promotion, which started on 11 January. And to reward their loyal trade partners, the Ibn Battuta Gate Hotel is participating at GIBTM with a rather special extension to its ongoing promotion.

“Any trade visitors who make a group enquiry valued at more than AED50,000 will be given a platinum key. If that group booking is realised or pre-pays before the closing date of 11 May, the key automatically qualifies them for the grand draw and a chance to win a luxury apartment for a year in the Ibn Battuta Gate Complex,” said Andrew Hughes, Director of Sales and Marketing at the Ibn Battuta Gate Hotel.

In addition, a daily prize draw will take place at the Mövenpick Hotels & Resorts Stand. Simply drop by for a discussion with the team from Ibn Battuta Gate Hotel and your business card will go into a draw to win a platinum key, one key will be drawn each day at the stand at 3pm.

“Our regular corporate and leisure customers have not been left out either. Confirmed room bookings or food and beverage reservations which exceed agreed predetermined cumulative thresholds, also qualify for platinum keys,” added Hughes.

In total, 20,000 golden keys have been given away offering discounts and prizes to the value of six million dirhams. The number of platinum keys was limited to 2,000 and so far over 600 have been entered by guests, spending over three million dirhams in the process so far. The grand draw is scheduled to take place shortly after the 11 May closing date.

The Ibn Battuta-themed hotel is an ideal place for incentive and business guests to celebrate any occasion in style. The hotel’s dramatic architectural interior design is anchored by its striking lobby, or Al Bahou. The huge 90 metre long trademark feature has a spectacular collection of 88 large-scale, eastern-style lanterns that hang elegantly above the lobby.
Restaurants include the Arabesque-themed signature venue Mistral along with the Sicilia Italian restaurant, Chor Bazaar for Indian cuisine and Shanghai Chic contemporary Chinese restaurant.
All guests at the hotel also receive complimentary access to the stunning Oceana Beach Club, located on Dubai’s stunning Palm Jumeirah, just 10 minutes away by shuttle bus.

The hotel is ideally located for ‘shopaholics’ - Ibn Battuta Mall is right next door and a dedicated Dubai Metro station is just minutes away. This brings destinations such as the world’s largest retail space, Dubai Mall, along with Mall of the Emirates and many other boutique shopping outlets within easy access.
For those seeking entertainment after dark, all guests receive complimentary access to Diablo, one of the city’s latest and trendiest R&B nightclubs.
“As incentives go, The Ibn Battuta Gate Hotel makes a compelling case,” said Hughes.

As the global hospitality industry continues to ponder the pace of business, Mövenpick Hotels & Resorts, in partnership with real estate developer, Seven Tides, prepares for the opening of more than 1,200 rooms over four properties in Dubai, UAE.

Within the pack of four is the 396-room Ibn Battuta Gate Hotel, a property of iconic stature both inside and out, which is cleverly inspired by the journeys of the 14th century Arabian explorer, Ibn Battuta himself. The hotel is located in ‘New Dubai’ and opened its doors to business travellers, holidaymakers and inquisitive tourists in October 2010.

On January 1 2011, the 216-room Mövenpick Hotel Deira opened to welcome the New Year. It has its sights set on offering an efficient welcome to visiting business executives, inquisitive shoppers, small meeting groups and lunch & dinner time diners in Dubai’s traditional locale of Deira on the north-side of the Creek.

Also in 2011, the Asian-inspired Royal Amwaj Resort & Spa on Palm Jumeirah will be ready to open. At first glance, the 293-room retreat-like resort seems to be playing a credible tune as it blows its own trumpet by announcing some ‘industry firsts’, including an upscale all-inclusive package available through preferred travel partners.

2011 will also see the pack complete with opening of the contemporary Oceana Hotel & Spa. Seven Tides’ second property located on Dubai’s Palm Jumeirah will open 324 rooms on the heels of the Oceana Beach Club and restaurant-bar venue, West 14th, the New-York Grill and Bar. Both the club and the restaurant opened for business during the summer of 2010 and like the hotel are set to deliver great family entertainment.

Mövenpick Hotels & Resorts, an upscale hotel management company with 12,000 employees, is represented through over 90 hotels existing or under construction in 26 countries with a concentration in its core markets of Europe, Africa, the Middle East and Asia. The international hotel group with roots in Switzerland is expanding and has a stated objective of increasing its hotel portfolio to 100 by end of the year 2010. With two hotel types, business and conference hotels, as well as holiday resorts, Mövenpick Hotels & Resorts has clearly positioned itself in the upscale segment. The hotel group stands for uncompromising product and service quality and is owned by Mövenpick Holding (66.7%) and the Kingdom Group (33.3%).
www.moevenpick-hotels.com