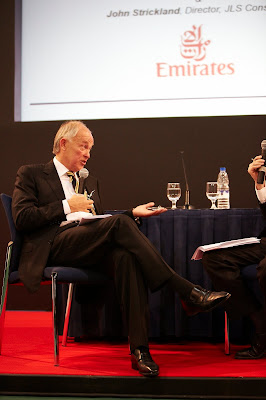 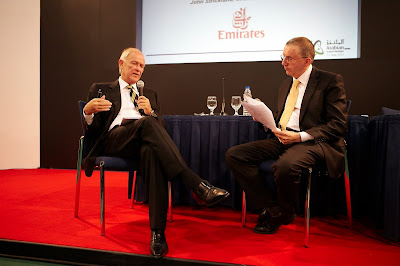 Head of Emirates Airline, Tim Clark, highlights fuel prices among other challenges and opportunities for regional and global aviation.

Speaking at ATM 2011 in a candid one-on-one seminar with leading aviation consultant John Strickland, Clark discussed the challenges facing commercial aviation along with the resilience of the regional sector.
High fuel prices was an area of focus, with oil now exceeding $120 per barrel, up from $86 per barrel a year earlier according to figures from the International Air Transport Association (IATA).
Emphasising the impact on airlines, Clark told ATM visitors and delegates that fuel costs now account for a staggering 43% of airline costs, compared to just 12% a decade ago.

“If by the end of the year oil prices have reached around $130 - $140 per barrel, watch this space, there will be some casualties. I expect that airlines which will struggle particularly are those on the periphery,” he said.

With Emirates Airline having mitigated some of the impact by implementing small fuel surcharges and managing business costs, he said that airlines with weaker balance sheets and less flexibility would suffer if high prices continued.
Commenting from the sidelines of ATM, Mark Walsh, Group Exhibition Director, Reed Travel Exhibitions, said: “Despite the high oil prices, lingering effects of the economic downturn impacting many industries and unrest in some parts of the region, the Gulf’s aviation sector is displaying strong growth.

“Arabian Travel Market is one of the most popular for airline businesses, among the leading international exhibitions in terms of the high number of airline exhibitors it attracts, thanks in part to our excellent access to the region’s key industry decision-makers,” added Walsh.

Recent forecasts from IATA indicate Middle East carriers expect to return a profit of $700 million for the year, a considerable improvement on the $400 million previously forecast. Negative impacts in some unrest-affected areas are balanced by the Gulf region, which benefits from economic activity related to high oil prices and a large share of the global long-haul market.

With regulations in Canada and Germany restricting Emirates’ landing rights at airports in some cities, Clark said he respected these decisions while explaining “there are always ways over, through or around such obstacles”.
Despite restrictions at some airports, Clark said many more countries were becoming increasingly aware of the connection between improved aviation links and broader economic benefits. He referred particularly to South America, with Emirates introducing flights to Rio de Janeiro and Buenos Aires in the coming months.
Regarding the ongoing difficulties in some areas of the Middle East, Clark referred to Emirates’ continuing flights to most areas of region, with the exception of Libya, along with a reduction in connections to some Gulf cities.

Even at the height of Egypt’s unrest earlier this year, Emirates reduced some of its flights but did not cut its Egypt services. While Emirates’ 2011 first quarter figures are not due for release until next week, he cited an impressive rebound in Egyptian passenger traffic during February and March.

Aviation was also covered in a day two panel session also moderated by Strickland, featuring senior representatives from Boeing Commercial, Air Arabia and Oman Air.
Arabian Travel Market is held under the patronage of His Highness Sheikh Mohammed Bin Rashid Al Maktoum, Vice President and Prime Minister of the UAE, Ruler of Dubai. Now approaching its eighteenth year, the show has grown to become the largest showcase of its kind in the region and one of the biggest in the world. In 2010, Arabian Travel Market featured 2,236 exhibitors across more than 20,000 square metres, attracting more than 22,000 visitors.
Posted by Imre Solt at 3:33 PM