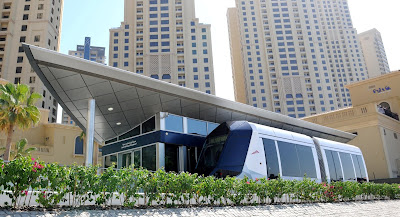 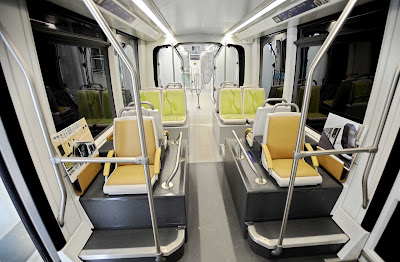 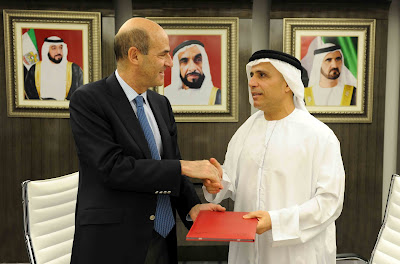 The contract was signed on behalf of the RTA by H.E. Mattar Al Tayer, Chairman of the Board and Executive Director of the RTA, and on behalf of Alstom by H.E. Patrick Kron, Chairman and CEO of Alstom, in the presence of Abdul Mohsin Ibrahim Younes, CEO of RTA Strategy & Corporate Governance Sector; Adnan Al Hammadi, CEO of RTA Rail Agency; and Safwan Hijazi, Regional Director of Alstom Office in Dubai.

"The selection of Alstom for the maintenance of Al Safouh Tramway was prompted by the fact that it is the only company in the world that manufactures tramsets powered by a modern, safe and catenary-free power supply system, which helps preserve the urban environment and historic heritage of the city of Dubai. Dubai will be the first city outside Europe to use this system, and the French city of Bordeaux is the first city in the world to use it," stated Al Tayer.

"The Contract covers the maintenance of the rolling stock and fixed installations under Phase 1 of Al Safouh Tram Project; which includes the supply of 11 tramsets, and construction of a 10 km-long track as well as 11 passenger stations. The Contract also has the potential of awarding Alstom the maintenance contract of Phase 2 of the project, which includes providing 14 additional tramsets, a 5 km-long track and 6 additional passenger stations.

"The contract covers the maintenance of various systems & equipment such as electrification, signalling and ticketing systems among others. It also covers preventive & corrective maintenance, equipment renewal, technical support, management of spare-part inventories for the tramsets, and running of a basic maintenance program as well as the maintenance of all passenger stations. It also covers the implementation of a tram depot, track & platform, points & crossings, power supply & distribution equipment, ground-level power supply system, communication & signalling systems and other electromechanical installations to be maintained in tip-top condition.
"All maintenance works to be undertaken by the Co will be measured daily in terms of the availability of the transport system and infrastructure to ensure optimal operating conditions for the trams, which will run for 18 consecutive hours a day.

Cofely-Besix Facility Management will be in charge of maintaining the stations, and depot as well as their Mechanical, Electrical & Plumbing (MEP) works along with the associated services (cleaning, handymen ...etc) in the stations and along the track.
“The Project serves residential and commercial areas along the tramway passing through Al Safouh, Dubai Marina, and Jumeirah Beach Residence. In recent years these areas witnessed high-end property developments for residential, commercial and tourist purposes. They encompass prominent commercial and tourist landmarks such as the Mall of the Emirates, Madinat Jumeirah and Burj Al Arab in addition to areas of high significance such as the Knowledge Village, Dubai Media City and Dubai Internet City as well as projects currently undertaken in Dubai Marina and others under planning stage such as Jumeirah Hills,” noted Al Tayer.

“Demographic studies and population density estimates in the project neighbourhood show that those areas are populated by about 180 thousands residents, 210 thousand workers and 20 thousand visitors. The high population and workers density reflects the importance of the tram project as an initial step in a chain of similar transit modes to cover all high density areas in the emirate.

“Al Safouh Tram Project extends 14 km along Al Safouh Road and the initial Phase envisages the construction of about 10 km-long track starting from Dubai Marina up to the Knowledge Village. The Tram network comprises 17 passenger stations of which 11 stations are covered under Phase I and spread across activity and population density areas along the tram route. Each train measures 44 meters in length and has a capacity to accommodate about 300 passengers. The fleet consists of 11 trams in Phase I and 14 more will be added in Phase II such that a total of 25 trains will be in place capable of commuting about 5000 passengers per hour per direction.

“The tramway basically extends at-grade level along Al Safouh Road but rises in an elevated section in certain areas of Dubai Marina for reasons dictated by urban structures of the locality. It passes in a path parallel to the Dubai Metro Red Line and links up with the metro system in three stations along Sheikh Zayed Road where tram stations are linked via footbridges with the metro stations to ease the mobility and exchange of passengers between the two modes. Al Safouh Tram will also be linked with the Monorail of the Palm Jumeirah at the entrance of the Palm from Al Safouh Road to facilitate passenger movement between districts served by both projects," said Al Tayer in a final remark.

Captions:
Al Tayer and Patrick during the signing of the contract
Posted by Imre Solt at 11:08 AM