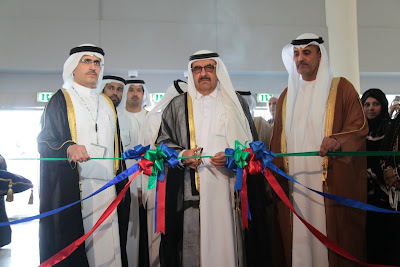 National oil and gas companies participates for the first time

Dubai, UAE 13 March 2012-: Under directives from HH Sheikh Mohammed bin Rashid Al Maktoum, Vice President and Prime Minister of the United Arab Emirates and Ruler of Dubai, the 14th Water, Energy, & Environment Exhibition 2012 (WETEX), organized by Dubai Electricity and Water Authority (DEWA) under the umbrella of the Dubai Supreme Council of Energy (SCE), opened this morning. The Exhibition lasts for three days from 13th to 15th March at Zabeel Hall and Halls 1, 2, 3 and 4 at Dubai International Convention and Exhibition Centre. HH Sheikh Hamdan bin Rashid Al Maktoum, Deputy Ruler of Dubai, Minister of Finance and President of DEWA, opened the Exhibition in the presence of top figures and officials in Dubai.

After the opening ceremony with HH Sheikh Hamdan bin Rashid Al Maktoum, top officials accompanied by HE Matar Humaid Al Tayer, Chairman of DEWA, and HE Saeed Mohammed Al Tayer, Vice Chairman of the Dubai Supreme Council of Energy and MD and CEO of DEWA, explored the Exhibition and viewed the displays and equipment being showcased by companies from 28 countries from over the world participating in the Exhibition. His Highness listened to an overview from HE Saeed Mohammed Al Tayer about the Exhibition and the wide participation of national and international companies, whose number has reached 1,055 this year. His Highness also listened to a summary of DEWA’s projects, achievements and updates in this year’s Exhibition, specifically the participation of the oil and gas sectors and their related activities for the first time this year.

His Highness Sheikh Hamdan bin Rashid Al Maktoum praised DEWA and the significant developments it has made for all its facilities in addition to the excellent services DEWA provides, which has made it one of the best utilities in the world. Also, His Highness praised the exhibition and the developments it has made every year and its global profile to date, which has become an important landmark in Dubai’s international exhibition map. His Highness also praised the continuous efforts of DEWA to protect the environment through green technologies and renewable energy projects and its applications of best practices in this field, which support resources sustainability and the green economy in Dubai.

“The 14th Water, Energy, & Environment Exhibition 2012 (WETEX) is being launched under directives from His Highness Sheikh Mohammed bin Rashid Al Maktoum, Vice President and Prime Minister of the United Arab Emirates and Ruler of Dubai, opens up new scopes, and attracts cutting-edge technologies and major international companies to Dubai. This enhances Dubai’s position as the preferred regional hub for finance, trade, business, and tourism. The number of companies and organizations participating in this year’s Exhibition reached 1,055 in comparison with 715 in last year’s Exhibition. Also, WETEX 2012 is characterized by the expansion of SmarTech, which showcases state-of-the-art technologies that conserve and reduce power consumption by incorporating the most eco-friendly designs and materials,” said HE Saeed Mohammed Al Tayer, MD and CEO of DEWA.

“This year’s Exhibition focuses on the environment by following up on the UAE’s progress and continuous efforts to conserve resources and protect the environment. The Mohammed bin Rashid Al Maktoum Solar Park, which was launched by His Highness Sheikh Mohammed bin Rashid Al Maktoum, is one of our pioneering projects to generate electricity from solar energy, and will have a production capacity of 1,000 Megawatts. This model of the park is on display at the Dubai Supreme Council of Energy booth, and forms the foundation and benchmark for our strategy to utilize clean and renewable energy, which plays an important role in our sustainable development. The Dubai Supreme Council of Energy will present the Dubai Integrated Energy Strategy 2030, as new sources of energy will be provided and, consequently, shares of different sources of energy will be changed to 71 % gas and the remaining 29 % comprising nuclear energy, coal and renewable sources of energy. In this way, electricity from solar energy will constitute 5% of our electricity needs in 2030,” His Excellency added.

His Excellency praised the huge turnout, which reflects the great position of the United Arab Emirates in general, and Dubai in particular, as the preferred hub for finance, business and other activities. This global economic event is a milestone, which adds to Dubai’s record of varied economic and commercial activities, organized all the year round.

“The participation of fossil fuel, including oil, gas and related activities, in this year’s Exhibition is of significant importance as fossil fuels are one of the sources of energy used at on a wide scale. Therefore, the Exhibition has become integrated and includes different sources of energy,” His Excellency pointed out.

His Excellency praised the participation by many ministries, municipalities, government departments, and public benefit organizations, which showcase their achievements and services. His Excellency also praised the wide participation from different countries of the world; such as the Kingdom of Saudi Arabia, Kuwait, Qatar, Bahrain, Egypt, Jordan, the USA, Korea, Russia, China, Canada, Belgium, Germany, the United Kingdom, Italy, Holland, Singapore, Greece, Turkey, and India.

“This Exhibition includes important displays and addresses critical issues, all of which help the UAE’s efforts to implement sustainable development within different economic sectors and protect the environment as a strategic objective. Throughout its journey to serve the nation’s economy, DEWA has promoted the Exhibition in many countries around the world, and there has been a good response and success in attracting a wide participation, due to the facilities it has provided so participants can showcase their ideas and products to help decision makers in these fields,” His Excellency added.

The Exhibition includes a list of major national and international companies, whose displays include a lot of products; such as agricultural equipment, desalination systems, modern systems of irrigation, water pumping equipment, boilers, cables, electrical transformers, connectors, energy saving products, pipes, valves, generators, electricity- and water-transmission and distribution equipment, and other modern equipment. This Exhibition also provides a great opportunity for decision makers from government departments in the region and all over the world to look at these products and meet face-to-face with companies, manufacturers and agents from different countries of the world. It provides participating companies with the opportunity to promote their products in the field of water, power and environment and showcase solutions to different problems that hinder the progress of these important sectors of economy. The Exhibition also contributes to developing effective strategies and state-of-the-art technologies to manage resources of power and water, while protecting the environment.

HE Saeed Mohammed Al Tayer invited specialists and professionals to attend the seminars and lectures of the Exhibition as well as cutting-edge technologies in these fields, which target professionals and technicians from different government and private sectors.

On an environmental level, the SCE has signed a Memorandum of Understanding with the Dubai Carbon Centre of Excellence to develop a strategy for CO2 and greenhouse gas abatement and this strategy will link the necessary processes and policies for carbon credit trading, while providing financial incentives to reduce emissions. This is part of a comprehensive initiative to turn the UAE into an environmentally-friendly nation.
Posted by Imre Solt at 6:38 PM