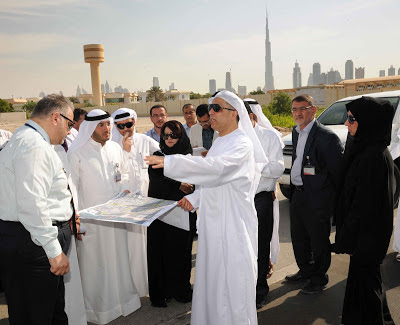 Steps taken include charting the path, specifications of the Canal

Project contracts to be awarded before the end of 2012, construction to start in the first quarter of 2013

The Roads & Transport Authority – Mohammed Al Munji :
The Roads & Transport Authority (RTA) has taken the initial steps towards the realization of the Business Bay Canal Extension Project, which has been endorsed by HH Sheikh Mohammed bin Rashid Al Maktoum, Vice-President and Prime Minister of the UAE and Ruler of Dubai, comprising modifications on the existing roads & bridges in order to extend the Canal from the Sheikh Zayed Road up to the Beach of the Arabian Gulf. RTA will award the project contracts before the end of this year, such that contractors will start construction works as early as the first quarter of 2013.

H.E. Matar Al Tayer, Chairman of the Board and Executive Director of the RTA has recently visited the project site accompanied by the CEO of Traffic & Roads Agency Engineer Maitha bin Udai, Director of Roads Nabeel Mohammed Salih, Director of Strategic Planning Nasir Hamad Bu Shehab, and a host of engineers from the RTA as well as Parsons, the Project Consultant.

Al Tayer inspected the path specified for the Water Canal from the Business Bay, which stretches 2.8 km in length, and ranges from 80 to 100 meters in width. The Canal will cross the Sheikh Zayed Road (before Safa Interchange) and passes through Safa Park, Wasl Road, Jumeirah 2, and Jumeirah Road and goes on to terminate at the Arabian Gulf, thus ensures the renewal of water in the entire Canal. Al Tayer also reviewed the facilities & houses impacted by the project.

Al Tayer directed the work team overseeing the project construction to prioritize it, considering it one of the vital projects undertaken by the RTA with a peculiar nature. The Canal passes across populous areas which have facilities and services that ought to be dealt with in a professional manner. H.E. directed to study the best path for the Canal taking into consideration the hydraulic study of the water flow in the Canal, and the navigation of marine transit means.

Al Tayer directed to attach proper attention to the areas stretching in parallel line with the Canal; which will be a key tourist landmark in the Emirate attracting tourists & sport enthusiasts. He also called for allocating areas for service utilities, cycling & pedestrian tracks, greens, and pedestrian bridges linking both sides of the Canal.

The RTA will carry out several improvements on the key roads intersecting the Canal as well as the surrounding areas such as Jumeirah and Al Safa neighbourhoods including the construction of roads alongside the Canal to assist the mobility between those districts. As for pedestrians, a free and safe movement will be provided by constructing 3 pedestrian bridges across the Canal in addition to footpaths on all the new main bridges passing over the Canal. Moreover, tracks dedicated to practicing light sports, such as jogging & cycling, will be constructed along both sides of the Canal. Landscaping works will also be made in both sides of the Canal including greens, benches, and public relaxation areas, among other various facilities and tourist-oriented projects.

The water Canal will generate a plethora of business & investment opportunities including the possibility of utilizing it to harbor floating hotels, constructing hotels & restaurants on both sides in addition to the provision of integrated tourist & recreational facilities in Al Safa Park. The project will further add a fresh urban and tourist landmark to the Emirate landscape; which will boost the odds of Dubai bid for winning the hosting of the World Expo 2020.