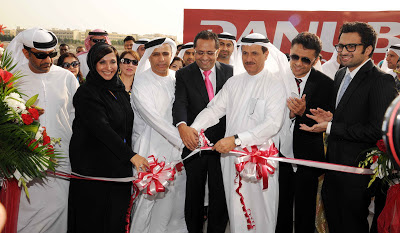 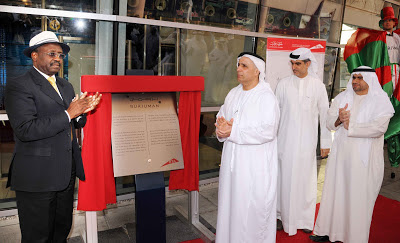 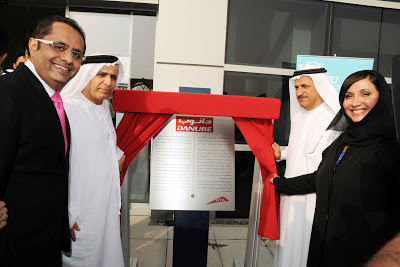 H.E. Sultan Saeed Al Mansouri, Minister of Economy, accompanied by H.E. Mattar Al Tayer, Chairman of the Board and Executive Director of the RTA, has officially opened the Station for Dubai Metro users. The Danube Station is the only metro station located at the grade and spans about 132 meters in length, 29 meters in width and has a capacity to handle 11,000 passengers per hour per direction.
“The Metro Stations Naming Rights Project has realized an unprecedented marketing concept throughout the world, and assisted the government with funds for the betterment of services delivered to the residents of the Emirate, besides offering businesses a new platform for branding and interacting with customers,” said Al Tayer.

“Through Serco Co, the Dubai Metro operator, the RTA has finalized all technical trial runs of the Metro, including communication systems, automatic operation system, power feed, air-conditioning, electronic systems on board, lighting systems and the integration of various subsidiary systems along with their components. It has also finalized the training of front-end & customer service employees at the Station on various systems who have already been deployed after being subjected to intensive training courses in customers service, implementation of regulations & procedures chalked out by the RTA for maintaining the facilities of the project, and the enforcement of law against offenders,” explained Al Tayer.

For his part Mr. Rizwan Sajan, Founder & Chairman of Danube Group, said: “The Group takes pride in the solid partnership forged with the RTA in the implementation of the Naming Rights of the Dubai Metro Project. This partnership is part of the Group’s commitment to support the infrastructure of Dubai Emirate, besides associating the name of the Group with such a vital and giant project such as the Dubai Metro with the aim of cementing the brand, and boosting the partnership with the public sector.”

Sajan expressed his deep gratitude to the Dubai Government represented in the RTA for offering Danube Group the opportunity to be part of the Dubai Metro Project, the longest driverless metro project worldwide.

Burjuman Station
H.E. Matar Al Tayer, Chairman of the Board and Executive Director of the RTA, accompanied by Mr. Essa Ibrahim, General Manager of Burjuman Center, unveiled the plaque of Burjuman Metro Station (formerly known as Khalid bin Al Waleed Station); which has joined the Naming Rights of the Dubai Metro Project.
The Station, which has four entry points fitted with elevators along with lifts at the main entry points, stretches about 126 meters in length and 102 meters in width and sits 20 meters below the ground level. The station has a capacity to handle about 16,000 passengers per hour.

“Burjuman Station is considered the second interchange station where the Red and Green Lines intersect and features high-class internal decorations ranking it among the world’s most gorgeous stations. The station is also very busy having being used by 15.6 million persons since the metro operation started in September 2009, with an average monthly ridership of about 400 thousand passengers,” added Al Tayer.
For his part, Essa Ibrahim General Manager of Burjuman Center, praised RTA’s efforts in upgrading the infrastructure of transport & roads sector, and delivering top-quality mass transit services.

Al Ghurair continued: “The Dubai Metro is considered one of the successful models, considering it one of the most effective projects around, and Burjuman Center is keen on contributing to the success of the Project and obtaining the naming right, considering it part of its efforts to support the vision of the Dubai Government aimed to showcase it as an ideal city in all respects for the benefits of residents and visitors.”

At the end of the ceremony, the attending personnel from the RTA and Burjuman posed for photos.