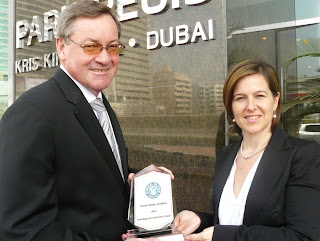 The certification marks another milestone in the success of the 390-room five-star property, “we are truly proud to receive this recognition that reinforces our commitment to the emirates’ transition towards a greener economy,” said Scott Butcher, General Manager.

According to Sandrine Le Biavant, Division Manager, Farnek Consulting, the hotel demonstrated ‘top to bottom’ commitment to the certification process, with team members involved at all levels and across all departments..

“From the simplest step of encouraging team members to switch off computers and office lights when not in use, to the launch of a dedicated waste separation and recycling programme, the Park Regis Kris Kin Hotel Dubai team has shown real commitment to achieve certification, with a clear two-year strategy and a well thought-out environmental plan,” she said. “Building on its newly certificated status, the hotel will roll out a number of new carbon footprint-reducing initiatives in 2013 and has also launched an internal forum to generate further ideas and proposals”.

Concerns regarding the substantial impact of tourism on the global environmental footprint are driving the hotel’s green commitment and Butcher stressed that as a major consumer of energy and water, the hospitality industry needs to take sustainability seriously.