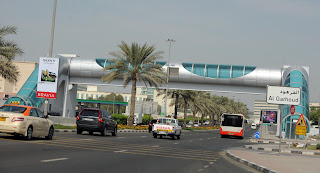 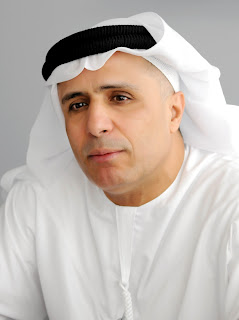 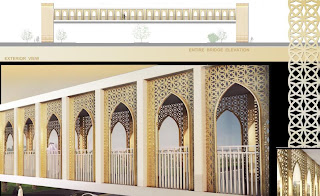 The Roads and Transport Authority (RTA) has expedited the construction of 13 pedestrian bridges, with construction works in the project set to be completed next June, thus the total number of footbridges in Dubai will soar to 87 bridges spreading all over key locations in the Emirate. These include 34 pedestrian bridges of the Metro stations (23 on the Red Line and 11 on the Green Line).
Commenting on the Project, H.E. Mattar Al Tayer, Chairman of the Board and Executive Director of the RTA, said: “Works in the new pedestrian bridges project started in June 2012 and bridges have been designed at the highest international standards tailored to ensure the safety of road users.

“Up to the end of last year, 80 pedestrian bridges have been constructed and in 2012 the RTA opened 2 pedestrian bridges; one on Abu Baker Al Siddique Road and the other at the Emirates Hills. In the past few years the RTA opened a number of footbridges on various Dubai roads such as Khalid bin Al Waleed Road, Al Mankhool Road, Bani Yas Road, Zaabeel Road, Damascus Road, Al Rasheed Road, and Al Rebat Road in addition to Abu Baker Al Siddique Road.

“Bridges currently under construction span a variety of vital locations across the Emirate that have been selected in the light of traffic studies guided by the intensity of peoples movement between the two sides of roads, office and marts concentration areas, and locations witnessing high run-over accident rates (Black Points). Among the key bridges to be constructed are two bridges across the Sheikh Mohammed bin Zayed Road; the first one near the Fruits & Vegetables Market at Al Awir, spanning 100 meters, and the other one is near workers accommodation at Muhaisnah, stretching 86 meters. Other bridges spread at Al Mina Road, Sheikh Rashid Road, Umm Suqeim Road, Al Wuhaida Road, Amman Road, Latifa bint Hamdan Road, Abu Baker Al Siddique Road, and Al Khaleej Road in addition to 4 bridges at Jebel Ali Industrial Area.

“Pedestrian bridges, particularly the ones designed in recent years, have several aesthetic features. Besides forming part of the distinctive features of Dubai Emirate, these crossings are fitted with modern electrical fixtures, and some of them are inspired by the designs of traditions & heritage icons of the UAE, others replicate the modern & stylish model of the city,” added Al Tayer
“The RTA applies specific criteria in designing & constructing pedestrian bridges in Dubai Emirate through conducting traffic studies focused on population density of the area, road speed, services provided at both sides of the road, and the number of traffic accidents. The results concluded to in those studies are being translated into technical & traffic studies which might include pedestrian bridges or signalized pedestrian crossings.

“The RTA, represented by the Traffic & Roads Agency, is making every effort to minimize pedestrian accidents; which are not restricted to technical measures but include multi-faceted key aspects such as engineering safety measures, and traffic awareness campaigns for various community members, particularly students. The RTA is continuously working on awareness campaigns to diffuse the importance of using safe transit means such as pedestrian crossings, bridges and subways in order to avoid run-over accidents,” explained Al Tayer.

RTA Chairman of the Board and Executive Director called upon pedestrians to use footbridges and subways designated for crossing roads, and invited motorists to abide by the specified speed limits, and slow down near pedestrian crossing points to ensure the safety of all road users.