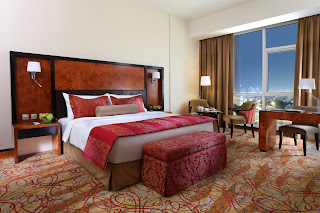 The award-winning Millennium Airport Hotel Dubai, has just completed the current phase of its expansion programme, adding 150 new superior rooms to the existing inventory of 115. The business-focused premier four-star hotel, will add a further 75 club rooms and suites before the end of the year, making a total of 341 bedrooms.

Located on the first four floors of the extension, the 40-square metre superior rooms are equipped with corporate travellers in mind and feature an executive working desk, 40-inch flat screen television, WiFi internet access, coffee and tea-making facilities and a spacious bathroom with separate bath and walk-in shower.

Named the Middle East’s Leading Airport Hotel at the 2013 World Travel Awards, the opening of the hotel’s extension is timely, according to general manager Simon Moore. ”These additional rooms, not only increase the number of guests we can accommodate, but by offering the very latest in technology, design and guest comfort, they also enable us to compete more effectively for greater market share.”

The extension will also be home to 75 club rooms and suites before the end of this year, as well as three new food and beverage outlets and state of the art ballroom and meeting facilities which should come on stream early next year.

The hotel extension comes to market at a time when MasterCard’s latest Global Destination Cities Index, positions Dubai, as the seventh most popular destination city with 9.89 million international overnight visitors in 2013, up 8.2% from last year. And if Dubai continues its current rate of growth, by 2016 it will have moved into third place, above Paris and Singapore, which measured 13.92m and 11.75m visitors, respectively.

Hospitality Consultant TRI measured Dubai’s hotel occupancy levels during the first half of this year at 86%, and forecasts an 11% increase for the full year 2013 compared with the previous year.

“With our location close to Dubai Airport, we are ideally situated to take advantage of the increasing numbers of stopover passengers, short stay leisure visitors and of course business guests quite literally on ‘flying visits’,” said Moore.

Of course if Dubai wins the World Expo 2020 bid, this will dramatically increase the number of visitors to the UAE.

A recent Expo 2020 economic impact report by Oxford Economics shows that Dubai Expo 2020 would support over 277,000 jobs – many generated by the $7.2 billion that would be invested in transport infrastructure. HSBC estimates 45,000 new hotel rooms would be needed to host Expo 2020, the equivalent to adding over 6% per annum to Dubai’s existing room capacity, which will cost a further $7.2 billion.

Turning his attention to the significant outdoor space that has also been renovated, Moore added. “With the cooler temperatures putting outdoor events back on the agenda, our al fresco venues are a major driver for banqueting business, giving us an added value edge, especially for the MICE market,” added Moore.

Popular settings for outdoor social gatherings and corporate events, the 503-square metre Oasis Pool & Bar area has been re-landscaped to offer an enhanced experience for large scale events for between 150 and 600 guests.

This is complemented by the popular Terrace area adjacent, which cumulatively incorporates the outdoor spaces used by the hotels’ three dining and entertainment outlets – Cactus Jack’s, Biggles pub and Gozo Garden – with a combined capacity for 550 guests.

The hotel has also been nominated in the ‘World’s Leading Airport Hotel’ category at the 20th annual World Travel Awards, taking place 30 November in Doha Qatar.

For more information about The Millennium Airport Hotel Dubai, please log onto www.millenniumhotels.com