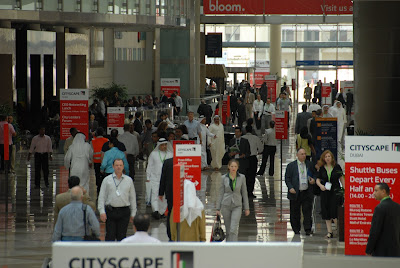 If Cityscape Dubai 2006 and 2007 were the boom years, and 2008 was held against a backdrop of uncertainty, then perhaps fittingly the 2009 show had transparency, realism and cautious optimism in equal measure as the region waits for economic data indicating a consistent recovery is underway.

A slew of industry reports, comprehensive conference programme and series of break-out seminars and networking events all lay testament to an industry at a cross-roads, one wrestling with a range of internal and external challenges, yet keen to pursue new ventures and opportunities nonetheless.

Unsurprisingly, in the context of a lingering global recession, visitor numbers fell around 50% on last year, to around 38,000, and exhibitors were down from 340 to 218.

But Rohan Marwaha, Managing Director of Cityscape Dubai, was not surprised by the turnout and claimed that Cityscape held up well by international standards.

“We saw a shift back to market fundamentals at Cityscape Dubai this year. The speculators and other amateur investors were conspicuous by their absence as were any hint of unrealistic or dazzling developments. The mood was sober and professional. However compared with other real estate events in Europe and Asia, Cityscape by comparison was very well supported.”

International participation actually increased as a year-on-year percentage, with stands from Sudan, Angola, Paris, and companies from Canada and Australia, complemented by a healthy regional presence which extended across the GCC and Iraq.

He said the changing dynamics of the industry may well lead to further changes to Cityscape in the year ahead, with more networking opportunities, closed sessions and round tables.

”We will continue to tailor this event to meet the requirements of real estate professionals, whether locally, regionally or internationally,” he said.

With no high-profile launches that have characterised previous exhibitions, the main themes were realism and transparency.

That was apparent from the very first morning, as Donald Trump Jnr reflected on how the concept of spending had become lost before recession, and urged everyone to get “back to basics.”

For Dubai, he recognised the project boom – its greatest asset – was now its greatest liability as new supply enters the market. “But in terms of opportunity, now is the time to be looking at real estate here. When things normalise, Dubai is going to be in a lot better position than a lot of other cities.”

Skip Schwarz, Director of Acquisitions, Asia, for Heitman, concurred and added, “The biggest challenge for emerging markets is transparency and identifying the right partner for placing capital and feeling comfortable that your money is going to work.”

There was widespread agreement among the industry reports that Dubai, the most developed property market regionally, has been hardest hit and faces major challenges as it wrestles with debt repayments, sliding prices and oversupply issues, but recovery predictions proved inconsistent.

The Cityscape Intelligence Focus On Dubai Report stated 472 commercial, residential and hospitality projects have been cancelled or on put on hold – but it also found the UAE retains “an extraordinary level of construction activity across all sectors and the total value of UAE projects in the study comes to around US$900 billion”.

Jones Lang LaSalle, which released its MENA Real Estate Investor Sentiment Survey, identified Abu Dhabi, Qatar and Saudi Arabia as the first real estate markets to bounce back regionally “due to their strong economic fundamentals and visionary government initiatives”. Rider Levett Bucknall found Qatar has been the least severely affected by the recession and Saudi Arabia has the most development potential.

Reflecting the pan-global impact of the recession, this year’s exhibition had an unparalleled international flavour.

The World Architecture Congress was held in association with Continental Europe, Hong Kong, Japan and UK chapters, and the exhibition halls promoted projects from all corners of the world, including a striking stand from Angola. The Awards, which received a record 300 entries this year, rewarded local, regional and international excellence.

Habiba Al Marashi, Chairperson, Emirates Environmental Group and Board Member, UN Global Compact, said a 100% mindset change was necessary to reduce carbon emissions and encourage best practices industry wide. “It’s not just political will, leadership should be taken by the private sector which is one of the sectors lagging behind,” she said.

For full details of Cityscape Dubai 2009 and its events, please visit: www.cityscape.ae

About Cityscape
Cityscape, organised by IIR Middle East which is part of Informa plc, encompasses a series of exhibitions and conferences that take place in Dubai and Abu Dhabi; Asia; Saudi Arabia; USA; Latin America; and India.