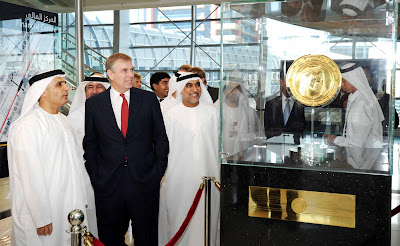 HRH Prince Andrew The Duke of York, the UK's Special Representative for International Trade and Investment, yesterday visited Dubai Metro where HRH was received at Al Ittihad Metro Station by H.E. Mattar Al Tayer, Chairman of the Board and Executive Director of Roads and Transport Authority (RTA), in addition to several RTA executives and senior officials of the British SERCO Co., the Operator of Dubai Metro.
Prince Andrew was briefed by H.E. Mattar Al Tayer about Dubai Metro Project; which comprises the Red and Green lines, and said: “The Red Line extends 52 km (5 km under the ground) and spans 29 stations including 4 underground stations (Khalid bin Al Waleed, Al Ittihad, Riggah and Port Saeed), 25 elevated stations, including two stations at Dubai International Airport. The Green Line which extends about 22 km (10 km underground track), includes 18 stations 6 of which are underground”.
The Prince reviewed the details of designs and finishing works of Dubai Metro trains and stations made at deluxe and luxurious standards. They have a unique design encompassing modernity and authenticity of the UAE heritage. The external design of the roofs emulates the shell shape and replicates the close link between the peoples of the UAE with the sea and pearl fishing legacy. The interior design replicates the four elements of nature; water, air, fire and land besides the heritage design of Al Ras and Ghubaiba Stations.
“Dubai Metro has 48 stations, including the Union Station which is the biggest underground station worldwide spanning an area of 25,000 meters. It is one of the key interchange stations where the Red and Green Lines meet, with a capacity to load 22,000 passengers per hour. The station comprises two levels and extends 230 meters in length, 50 meters in width and 18 meters in depth, with numerous trading outlets for serving metro users. It has two entrances fitted with lifts and escalators. Four tunnels branch out of the station linking up with Khalid bin Al Waleed station and Riggah station on the Red Line, Bani Yas station and Salah Uddin station on the Green Line. Khalid bin Al Waleed Station is second interchange station where the two lines meet. The station has four entrances fitted with escalators and lifts at the main entrances.
Afterwards Prince Andrew, accompanied by H.E. Mattar Al Tayer, boarded Dubai Metro from the Union Square Station to the Financial Center Station; which has a capacity to handle 11,000 passengers per hour per direction. The station extends about 130 meters in length and 30 meters in width and has two entrances fitted with escalators and lifts. The metro stations use the automatic platform doors technology which is synchronized with the opening and shutting mechanism of train doors in order to provide maximum comfort, safety and security for passengers, as well as maintain the efficiency of air-conditioning system in the interior of stations and carriages from the external climatic impacts.
Al Tayer also briefed Prince Andrew on the stations linked with air-conditioned footbridges which have spacious corridors for the public to cross between the two sides of Sheikh Zayed Road. They are fitted with travelators and high-class finishing, and these bridges are set to revolutionize the link between the public and the city, and enhance the trend to minimize the reliance on private vehicles.
At the conclusion of the visits, HRH Prince Andrew the Duke of York expressed his admiration of Dubai Metro, the designs of the trains and stations and the high technology of it.
Posted by Imre Solt at 5:19 PM