Burj Al Arab ushers in the Year of the Snake 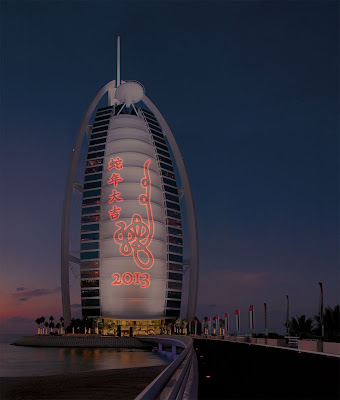 Burj Al Arab ushers in the Year of the Snake

In the last three years, the ease of securing UAE visas has helped attract a record number of Chinese tourists and businesspeople to the UAE and many have made Burj Al Arab their prime destination. Contributing to this success, the hotel’s authentic Far East Asian dining destination, Junsui, is drawing on the expertise of Chef Foong to create a week-long, celebratory experience for the Year of the Snake.

“Chinese visitors are among the top three fastest-growing guest segments for Burj Al Arab. Our experience in meeting the needs of these guests, as well as the insight of our Chinese colleagues, has enabled the hotel to create memorable offerings and celebratory moments for occasions such as Chinese New Year,” said Heinrich Morio, General Manager for Burj Al Arab. ”For Chinese travellers coming to Dubai, Burj Al Arab has become a must-visit destination and the place to celebrate the most significant occasions.”

To launch its Chinese New Year celebrations, Burj Al Arab will project a massive red calligraphic serpent artwork on the sail-shaped exterior to welcome the Year of the Snake.

On the evening of 10 February, the hotel will host Chinese dignitaries and their families to witness the traditional lighting of the lion’s eyes to initiate a series of traditional lion dances. To the accompaniment of the Chinese zither music, Chinese delicacies hand-selected by Chef Foong will be served from live cooking stations, while children’s Chinese craft activities will entertain the youngest guests. The celebrations will continue for one week in Junsui, with traditional dishes including Fa Gao (Chinese-style cupcakes) and Nian Gao (new year cake) served alongside Dim Sum and Peking Duck.


• Photograph: Burj Al Arab’s sail illuminated in celebration of the Year of the Snake.


About Burj Al Arab
Burj Al Arab is managed by Jumeirah Group, the global luxury hospitality company and a member of Dubai Holding.
Burj Al Arab is designed to resemble a billowing sail and stands at a height of 321 meters. It is one of the most photographed structures in the world and has been consistently voted the world's most luxurious hotel, with features including in suite check-in and check-out, reception desks on every floor, round-the-clock private butlers and use of the hotel’s Rolls-Royce fleet and private beach. The hotel’s 202 luxury suites range from 170 to 780 square meters with a rain shower and a Jacuzzi in each suite, as well as six restaurants and conference and banqueting venues.

Email ThisBlogThis!Share to TwitterShare to FacebookShare to Pinterest
Labels: Burj Al Arab, Year of the Snake