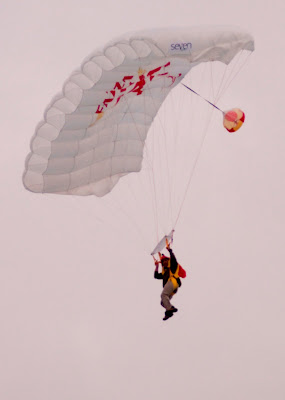 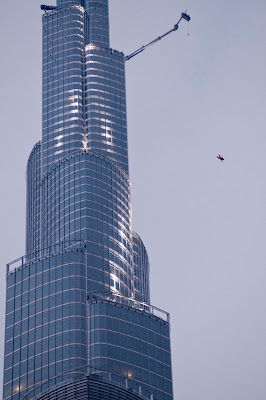 Dubai, UAE; January 6, 2010: UAE national Nasser Al Neyadi, representing Fazza Sky Team, set a new world record for the highest BASE jump executed from a building by sailing down safely on a parachute from Burj Khalifa, the world’s tallest building developed by Emaar Properties. He was accompanied by Omar Alhegelan, his BASE and skydiving trainer.

Nasser Al Neyadi and Omar Alhegelan, expert sky divers and BASE jump enthusiasts, made a perfect landing after covering a vertical descent of 672 metres (2,205 ft).

BASE jumping, an extreme sports activity, refers to the four categories of fixed objects from which one executes the jump – buildings, antennas, bridges or spans and cliffs or earth. The two base jumpers covered the distance in a breathtaking 10 second delay and 30-40 second parachute flight.

They set a new world record by jumping from the highest point of a man-made structure; the Burj Khalifa, and smoothly landed at Burj Park Island, with the parachutes fanning out 10 to 12 seconds after their adventurous jump.

Nasser is the Accuracy Sky Diving UAE national champion of 2007, and has undertaken more than 2,700 sky dives. Along with Omar; the Fazza Sky Team members made the first ever Mt. Everest Skydives jumping from 29,500 ft - another World Record Jump!

Omar started BASE jumping in 1997 and has previously jumped from Petronas Towers in KL, Malaysia, during the trans-millennium New Year’s celebrations, where over 300,000 spectators watched him along with another 14 BASE jumpers make another World Record. He also has to his credit over 15,000 sky dives and multiple World and US National Titles in Freestyle & Freefly Skydiving.

At 828 metres (2,716.5 ft), Burj Khalifa is the tallest building in the world according to the three main criteria of the Council on Tall Buildings and Urban Habitat (CTBUH). The CTBUH ranks the world’s tallest buildings based on ‘Height to Architectural Top,’ ‘Height to Highest Occupied Floor’ and ‘Height to Tip.’