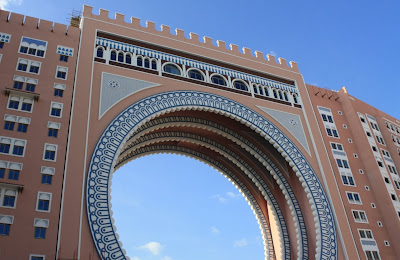 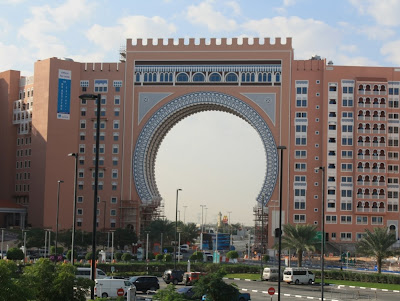 Construction work is now complete on the latest striking addition to the Dubai city skyline featuring an archway larger than the Arc de Triomphe in Paris.

The iconic arch at the Ibn Battuta Gateway development is the entrance to a unique combination of modern offices, luxury residential apartments for lease and a five-star hotel.

Tenants are already in place and operating from the 11 storey 400,000 square feet office complex at Ibn Battuta Gate, which aims to attract businesses with commercial interests in both Dubai and Abu Dhabi. Due to its single ownership structure the offices hold particular appeal to institutions and companies that require multiple units or several floors in a building with the potential for future expansion.

Complementing the office complex, is basement parking for over 350 cars as well as a multi-storey, robotic car park capable of handling 765 vehicles – the first of its kind in the Middle East – which has already begun operations. In addition, work is nearing completion on the 166 luxury residential apartments which are expected to be released for long term rental in February.

“Ibn Battuta Gate is a new portal to a maturing location that balances city and retreat, excitement and relaxation, business and pleasure,” said Brett Whalley, Head of Commercial Leasing at Asteco, one of the largest property services company in the United Arab Emirates, which is managing the flagship mixed-use development on behalf of Seven Tides.

“Ibn Battuta Gate is at the very heart of Dubai’s new residential and commercial corridor and is already a major feature on the city skyline. Now that the scaffolding has been removed and the preparations for the handover are in their final stages, the complex is attracting considerable interest from entrepreneurs both established and new to Dubai,” Whalley added.

The 396-room hotel will be handed over to owner Seven Tides at the end of January for the final fitting out with an anticipated opening by the Swiss hotel group Moevenpick Hotels & Resorts in May 2010.

Michael Scully, Managing Director Hospitality for Seven Tides said: “Ibn Battuta Gate is already a landmark with its striking architecture and will appeal to those who appreciate sophistication and five-star luxury, whether for business or leisure. Moreover our food and beverage outlets will be complemented by a light-hearted, casual atmosphere creating a lively, family-focused dining proposition.”

The Ibn Battuta complex is within 400 metres of a Metro station due to open sometime in February this year providing direct access to the commercial business heart of the Jebel Ali free zone as well as Dubai Marina, Jumeirah Lake Towers, Internet and Media City, Dubai Financial Centre, Dubai World Trade Centre and central Dubai itself. The development is also adjacent to Ibn Battuta Mall with 300,000 square metres of retail space and entertainment attractions.

Dubai-based Seven Tides is an internationally oriented holding company established in 2004 with a portfolio of property in hospitality, commercial and residential sectors in London and Dubai.

Image 1:
Brett Whalley Head of Corporate Services at Asteco ‘hands over The Gate’ to Michael Scully Managing Director of Hospitality at Seven Tides.

Image 2+3:
Ibn Battuta Gate is at the very heart of Dubai’s new residential and commercial corridor and is already a major feature on the city skyline- Brett Whalley, Head of Corporate Services at Asteco.

About Asteco
Founded in Dubai in 1985, Asteco is a major regional real estate services firm and the one of the largest property services company in the United Arab Emirates. Asteco offers clients independent market analysis, design development consultancy and valuation services, sales and leasing services, as well as asset and property management services.
Posted by Imre Solt at 4:18 PM