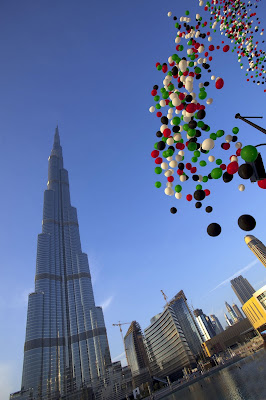 
Dubai, UAE; January 4, 2010: The world's tallest tower, developed by Emaar Properties, was unveiled tonight to a crowd of thousands and the world in a crescendo of fireworks, lasers and fountain displays.

A closely guarded secret, the official height of Burj Khalifa was flashed onto a giant screen before an estimated crowd of more than 400,000, as lasers and fireworks lit up the night sky.

Fireworks cascaded from the tower's spire to the base and lasers blazed out from all levels leaving the crowds awestruck.

The height was disclosed in arithmetic progression, with the numbers being flashed onto the screen, one after another. The tower's height breaks all existing world records for tall buildings.

Burj Khalifa is the tallest building in the world according to the three main criteria of the Council on Tall Buildings and Urban Habitat (CTBUH). The CTBUH ranks the world’s tallest buildings based on ‘Height to Architectural Top,’ ‘Height to Highest Occupied Floor’ and ‘Height to Tip.’

Other world records for Burj Khalifa include the highest occupied floor in the world, at over 550 metres (1,800 ft); the highest outdoor observation deck in the world – At the Top on Level 124; and the tallest service elevator, which travels to a height of 504 metres (1,654 ft).

Mr. Mohamed Alabbar, Chairman, Emaar Properties, said that with the unveiling of the final height of Burj Khalifa, the world now had a new reference point for high-rise developments.

“Burj Khalifa is an example of collaboration on a global scale, and the tremendous positive energy that can be generated when people from all over the world come together to work towards a common goal. Thousands of professionals and skilled workers from around the world worked on this once-in-a-lifetime project.”

“More than 60 of the world’s leading consultants including South Korea’s Samsung Corporation and New York-based Turner Construction International realised the design for Burj Khalifa of Chicago-based Skidmore, Owings and Merrill (SOM),” he said.

With a total built-up area of about 6 million sq ft, Burj Khalifa features nearly 2 million sq ft of residential space and over 300,000 sq ft of prime office space, in addition to the area occupied by the keenly awaited Armani Hotel Dubai and the Armani Residences. The tower also features modern lifestyle amenities including clubs, health and fitness facilities, gourmet restaurants and the 124th floor observation deck, 'At the Top.'

Burj Khalifa is the focal point of the 500-acre ‘mega-project’ by Emaar Properties, described as the new heart of Dubai.