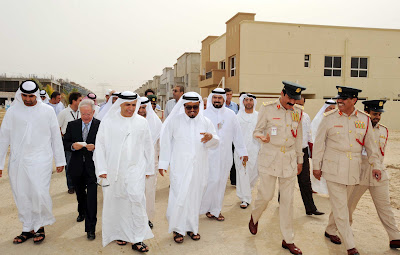 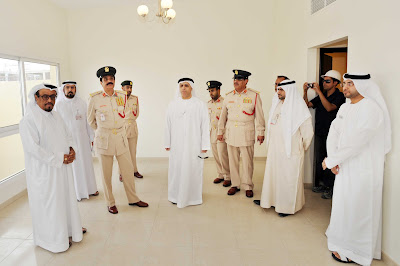 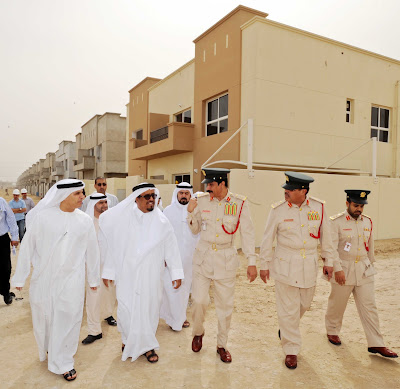 His Excellency Lieutenant General Dhahi Khalfan Tamim, Dubai Police Commander-in-Chief, and H.E. Mattar Al Tayer, Chairman of the Board and Executive Director of Roads and Transport Authority (RTA), in the presence of H.E. Major General Khamis Mattar Al Mazeina, Deputy Commander-in-Chief of Dubai Police, inspected the work progress in the new residential compound of the Dubai Police, constructed by the RTA in coordination with the Dubai Police General HQ. The project comprises the construction of 322 villas at Oud Matina, costing 390 million dirham spanning an area of 177 thousand square meters. The project is being constructed in compensation of the old police quarters at Al Qusais, on the site of which the Dubai Metro Green Line’s Depot was constructed.

Commenting on the work progress, H.E. Al Tayer said that project completion rate had exceeded 30% and all project works were set for completion on 30 October 2012. “Each villa occupies an area of 322 square meters and the total built area of the project is 103 thousand square meters. The villas have a unique structural pattern featuring four designs of different colours inspired by the local environment,” he elaborated.
H.E. Dhahi Khalfan Tamim and H.E. Mattar Al Tayer, along with their companions, toured one of the completed villas. The complex features inter-linked accommodation design pattern, with each house consisting of a ground and first floors that together contain five bedrooms, maid's room, family hall, Majlis, five toilets and all appurtenances needed for decent lifestyle patterns. RTA has provided two parking spaces for each house with direct entry points through them in addition to that the Majlis has an exclusive entry point and attached bathrooms. The ground floor contains a bedroom, kitchen fitted with cupboards, washing tubs, extensions, and a maid’s room fitted with a bathroom, while the second floor has four rooms and a living room.

Lt. General Dhahi Khalfan was briefed by Abdullah Al-Madani, CEO of RTA Corporate Technical Support Services Sector, who reiterated RTA’s compliance with all construction specifications applicable in the UAE, and the standards adopted by the Dubai Municipality, while taking into account the nature and environment where insulating materials, such as block and glass, have been used. RTA will also provide world-class sanitary ware.

Al Madani elaborated: “RTA has addressed the different tastes of population, complied with the international standards and used top quality equipment. It fitted each house entrance with electric gates and covered all floors & bathroom walls with ceramic. Houses have air-conditioned rooms, good quality sanitary ware & accessories, marble-covered ground floor entrance, aluminum & double glazed heat-resistant windows, shaded parking space, and greens surrounding each house.
“Coordination is in hand with all stakeholders including the Dubai Municipality, Dubai Electricity & Water Authority, and Etisalat as well as relevant RTA departments to ensure that all requirements are satisfied before the project is completed and delivered in full to the General HQ of Dubai Police, which in turn will allocate them to beneficiaries. Work has now been completed in paving the entire area, and providing all primary services such as electricity, telephones, drinking water, fire-fighting water, rainwater drainage and sewage networks before the project is being delivered.

“In designing the area, the RTA, in coordination with the Dubai Police, paid due consideration to ensure that the entry & exit points of the compound do not trigger congestion and are fully fitted with all requirements. It also allocated a land plot for building a mosque, and constructing a park in the backdrop for the locality equipped with all the standard amenities.

Caption:
Dhahi, Al Tayer and Al Mazeina inspecting the work progress in the project
Posted by Imre Solt at 12:31 PM