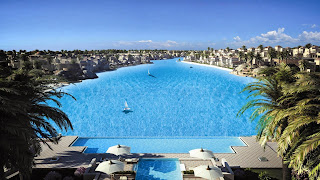 Dubai, 02 October 2013. Multinational Crystal Lagoons Corp. the patented technology developer of giant crystalline lagoons, marks its return to Cityscape in Dubai, which starts on the 8th October, with the launch of its latest and grandest project to date, which once completed will be entered into the Guinness Book of World Records.

Crystal Lagoons has signed a deal to construct the world’s largest manmade lagoon, covering 40 hectares, almost four-times bigger than the world’s largest existing lagoon. Located in the upscale Mohammed Bin Rashid City – District One residential community, located in the heart of Dubai, the lagoon will form an integral part of the US$7 billion project. Mohammed Bin Rashid City – District One is a prestigious joint venture between Dubai-based Meydan Group and Real Estate developer, Sobha Group.

The new lagoon with its expansive custom-made beaches, which offer unlimited scope for swimming, water sports and other water based leisure activities, will be a core amenity within Mohammed Bin Rashid City - District One’s fourty seven million square feet of freehold land. This expansive development will feature luxury residences, green parklands, waterways, a high end shopping and dining pavilion and large recreational spaces creating one of the lowest density developments in the heart of any international city.

“Caribbean landscapes are no longer exclusive to tropical destinations. Our pioneering concept and state-of-the-art technology, which allows for sustainable, swimmable, turquoise lagoons of unlimited sizes to be built and maintained at low cost anywhere in the world, is proving extremely popular with our growing list of partners across the Middle East,” said Kevin P Morgan, CEO, Crystal Lagoons.

“Dubai gives us an outstanding strategic position in the Middle East, and the opportunity to participate in a world-class development that adds prestige to our current project portfolio,” he added.

Mohammed Bin Rashid City (MBRC) is a planned mixed-use development containing four components; family tourism, retail, the arts and entrepreneurship and innovation. One interesting feature will be a public park larger than Hyde Park in London.

Crystal Lagoons’ global portfolio of 250 projects located in 50 countries includes five high-profile Middle East based developments. The company has completed two lagoons in the popular Egyptian resort of Sharm El Sheikh - including currently the world’s largest lagoon at 12 hectares – and another completed project in Jordan, along with two other projects under development in Oman and the UAE.

“As the only company in the world offering this concept and technology, we continue to expand
globally and revolutionize the real estate market by partnering with international developers and
resort operators to improve overall sales prices, velocity, and project densities. Based on our track
record in the Middle East, we have proven that our technology can add value to a top destination, making beachfront real estate a reality anywhere in the world,” said Morgan.

The company is currently in discussions for a number of exciting new tourism projects in Saudi
Arabia, Qatar, the UAE and Egypt, and Morgan emphasises the region’s attractiveness as
investment in tourism infrastructure continues to outpace other global markets.

Crystal Lagoons’ portfolio of regional projects also includes the completed 4.29-hectare Dead Sea Lagoon in Jordan, a project developed in partnership with Turath for Tourism & Real Estate Projects, and the under development 4-hectare lagoon located within the new Barka Resort in Oman. The Alargan-developed resort is situated 50 kilometres west of the capital, Muscat, and the lagoon has become the focal point of the community, which also offers three hotels, serviced apartments, villas, townhouses, apartments and a souk.
With the announcement of its new Dubai project, Crystal Lagoons is also on the way to securing its third Guinness World Records’ title for the world’s largest swimming pool, building on the success of its San Alfonso del Mar, Chile, and Sharm El Sheik, Egypt, locations.

The only global company with the technological capability to make the development of giant bodies of water economically viable, Crystal Lagoons is positioning itself as offering a unique product differentiator to high-profile tourism and real estate projects around the world.

Its technology makes it possible for people to enjoy an authentic beach experience in previously unimaginable locations, such as the desert or in the centre of major cities, with the potential to add economic value to new tourism destinations and real estate projects.

Crystal Lagoons uses up to 100 times less chemicals than traditional pool systems and only two per cent of the energy required by conventional filtering technologies, making the lagoons incredibly sustainable.

The largest real estate event in the Middle East, Cityscape Global 2013 takes place from 8-10 October 2013 at the Dubai International Convention and Exhibition Centre.

Crystal Lagoons’ development in Mohammed Bin Rashid City – District One, will cover 40 hectares once complete and will be almost four-times bigger than the world’s largest existing lagoon.