Omniyat brings a slice of Miami to Burj Khalifa District through The Pad, an artistic edifice tilted at 6.5 degrees 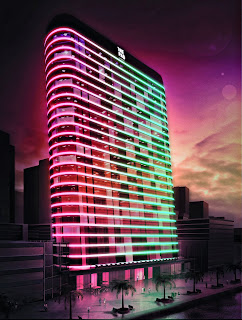 Omniyat brings a slice of Miami to Burj Khalifa District through The Pad, an artistic edifice tilted at 6.5 degrees

To be completed in mid-2015, The Pad heralds Omniyat’s hotel brand that will spread to other cities

Dubai, UAE, 7 October 2013: Omniyat, a leading developer in the Middle East, is bringing a slice of Miami to Dubai by re-configuring The Pad, an artistic edifice in Burj Khalifa District, tilted at a 6.5 degree angle, and themed on Miami designs. It will now offer luxury furnished apartments, instead of just residential apartments under the original model.

The iconic project will be displayed at Cityscape Global 2013 amongst other flagship projects developed by the company.

“The Pad, a 24-storey tower in the Burj Khalifa District featuring 231 luxury apartments, will be the new epitome of luxury in Dubai’s furnished apartment segment,” said Mark Phoenix, Omniyat's Managing Director. “The landmark structure boasts hand-picked works of art and superior levels of service. Themed on the eternal and classic Miami lifestyle, The Pad offers luxurious serviced apartments that are spacious and airy, with the highest standards of opulence.”

Phoenix said that the artistic landmark will be completed in mid-2015 as the first property under ‘The Pad’ hotel brand.

He added that The Pad inclines at an angle of 6.5 degrees, creating a unique look that is unsurpassed in the world. Also, Omniyat is creating distinguished exterior lighting with an LED façade, that will stand out brilliantly and light up Burj Khalifa District and its environs at night.

The Pad offers luxurious serviced apartments that are furnished with hand-picked repurposed items from all over the world. The colours, get-up and configuration of each apartment can be customized. All the furniture is eclectic and refreshingly modern and features fresh colours with sun-bleached gradients.

The Pad has a total built up of 431,000 square feet, with 364 parking spots, 24/7 valet parking, a massive lobby and a gallery dominated by a giant flamingo.

The Pad’s art collection includes specially-curated modern art pieces from around the world. Phoenix said that the company headed to Saatchi Gallery in London, looked far and wide in Japan and turned the European art scene on its head to obtain more than 200 one-of-a-kind art works, including pieces by Marc Quinn, Takeshi Murakami, Marcel Christ, Mario Testino and Damian Hirst. These pieces will turn apartments into an art gallery.

The Pad offers great convenience to its tenants. It offers the next level service as every small detail is well taken care of, be it shopping for groceries or appointing a personal trainer or dietician or enjoying a laidback massage or a swim in the pool which perfectly located at the base of the building. The building also offers a state of the art gym, a world class mocktail bar, a fantastic variety of fine restaurants as well as shops and eateries.

The Pad’s location is in the hub for restaurants, clubs and parks in Burj Khalifa District, and the biggest shopping centre in the world. It is strategically located to offer tenants an extraordinary stroll around the wide avenues of Burj Khalifa lined up with elegant palm-lined landscapes giving a great pedestrian feel.

With a portfolio of 15 plots in the Burj Khalifa district, 2.9 million sq ft of completed projects, and over 7.3 million Ft2 projects planned or under construction, Omniyat is one of the largest developers in this district.

Omniyat is in talks with leading partners, including hotel operators, anchor tenants, retailers and franchisees to maximize the value and desirability of its offerings to its investor base.

Email ThisBlogThis!Share to TwitterShare to FacebookShare to Pinterest
Labels: Omniyat, The Pad