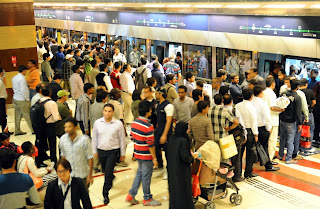 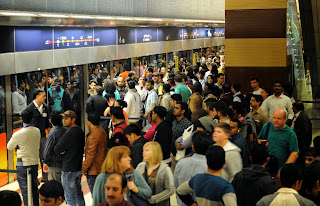 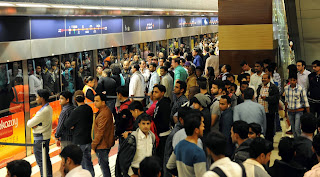 Roads & Transport Authority –
The total number of passengers who used mass transit means during the New Year's Eve celebrations reached 1,656,286 passengers; where the metro ridership clocked 727,829 passengers, taxis users reached 525,997 passengers, bus riders hit 314,109 passengers, inter-city bus riders touched 44,587 passengers, and marine transit means users amounted to 43,764 passengers.
Dr. Aysha Al Busmait, Media Adviser and Spokesperson of the Roads and Transport Authority (RTA), said, “The RTA had worked out a comprehensive traffic plan to control vehicular movement and public transport in the New Year's Eve, which witnessed intensive traffic movement, especially in the surroundings of Dubai Mall, Burj Khalifa, and the Palm Jumeirah. The plan has taken into account integrating various transport modes and traffic systems to facilitate the movement of people to and from these areas. Metro service hours have been extended to ensure continuous service starting from 5:30 a.m. on 31 December 2013 and until the early hours of Thursday morning, 1 January 2014. The Dubai Metro adopted a Skip-Stop operation system i.e. stopping at only one station of the following three stations: Business Bay, Dubai Mall – Burj Khalifa, and Financial Center i.e. the Metro stopped at one of these three stations and skip the other two from 04:00 pm on 31/12/2013 up to 04:00 pm on 01/01/2014 in order to increase the passenger capacity of the three stations.
Speaking about public bus services on the New Year's Eve, Al Busmait said, “The RTA provided 60 Feeder Buses to serve the users of the Metro, additional parking lots, and alternative taxi ranks over and above the existing routes serving the neighbourhood. 15 buses were deployed to serve Meydan parking, 20 buses to serve Trade Center parking, 15 buses to serve the parking of Zaabeel Park as well as the Residency & Foreigners Affairs Department, and 10 buses were deployed to move the public from the eastern part of the Sheikh Zayed Road to the Western part of the Road.
“Buses were operated 24 hours to match the operation of the metro stations, beside operating 40 feeder buses to serve Nakheel Harbour & Tower Station for the Palm Jumeirah.
“Taxi ranks and a dedicated lane were designated to facilitate their access to the event venue, where two main car parks were designated, the first was the sandy area of the Business Bay at the end of the tunnel extending from street No. 312, and the second car park was the sandy area alongside the Financial Center Road. Fifty-five Limousine companies have also been invited to offer services to passengers during the event,” concluded Dr. Aysha Al Busmait.