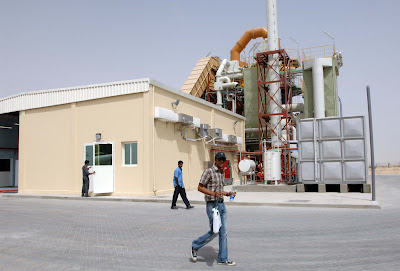 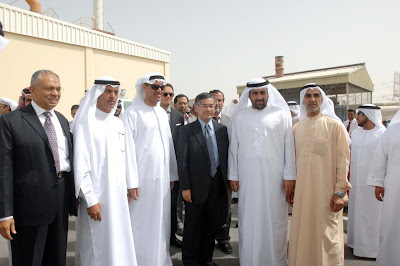 The UAE’s first and largest vertical medical incinerator is also the world’s second-of-its-kind. The project was implemented by Dubai Municipality and Zenath Group, the recycling and waste management arm of ETA Star Group. Located at Dubai Municipality’s waste treatment complex at Jebel Ali, the AED 24 million-incinerator has a total treatment capacity of 19.2 tones of medical waste per day on a 24 hour continuous run.

Congratulating Dubai Municipality and ETA Zenath Group for the prestigious endeavour, the Environment Minister said the cooperation between the public and private sectors in varied areas of sustainable development will go a long way in protecting the environment of the country.


Speaking on the occasion, Mr. Lootah, said: “The new incinerator represents the use of intelligent technology to minimize impact of waste on the environment. As its design allows for high energy efficiency and environment friendly emissions, the initiative aligns well with the overall vision of His Highness Sheikh Mohammed bin Rashid Al Maktoum, UAE Vice President, Prime Minister and Ruler of Dubai, of a green city.”

“The UAE healthcare sector is among the most dynamic areas of the economy. There has never been a better time to introduce this treatment facility, given the steady increase in the number of healthcare facilities in Dubai,” he added.

Lootah said that the existing small plant could not cope with the increase in toxic waste generated from factories and healthcare facilities in the emirate. "We had to set up a highly advanced new facility to treat this hazardous waste as waste generated from hospitals should be handled in the right way," he said.
He said that private companies as well as individuals can bring hazardous medical waste to this facility.

Elaborating on the initiative, Mr. Al Ghurair, said: “We are proud to partner Dubai Municipality for its landmark initiative, which cuts carbon footprint while eliminating medical waste. The treatment of medical waste necessitates the most rigorous processes. Given the enormous quantity of waste generated, it is essential to deploy energy efficient systems. The new incinerator consumes energy for initial start up as compared to the other incinerator where they require continuous fuel supply for burning.”

Reinforcing the group’s commitment to environmental safety and public health, Mr. Salahuddin, said: “The new incinerator reflects Dubai’s significant stride in environmental sustainability. The ETA Star Group has always been at the forefront of projects related to environment protection in Dubai. Emissions captured from the new built medical waste incinerator with double bag filter have been put through extensive tests. Results revealed that the quality of emissions were far better than expected - making it the second incinerator in the world that meets the highest control of emission norms and purity standards.”

Mr. J.S.A. Bukhari, Executive Director, Zenath Group, pointed out that the contract was awarded after the Group successfully met all the stringent quality specifications laid down by the Dubai Municipality. “The total medical waste generated in Dubai is approximately six tones per day, but is expected to double with the upcoming facilities in Healthcare City. The current spare capacity could therefore be utilized to treat hazardous, non hazardous industrial waste and municipal solid waste including sewage sludge.”

The ETA Star group has tied up with Mitsubishi Corporation and Plantec Corporation of Japan to obtain the vertical incineration technology, known for effective treatment of infectious waste. The new incinerator, which has met the standards set by EIA and Dubai Municipality Environment Department, will run for 330 days in a year, with 30 days set aside for maintenance work and operational shutdown.

Unlike other waste, treatment of medical waste has always been a very daunting task as it contains infectious microbes that vary in calorific value. Plantec Corporation has devised the technology for treating such material through the use of vertical incinerators, which remained the best method of treatment for medical waste. This technology was first incorporated in Japan and has been successfully used over the last 15 years.
-Ends-