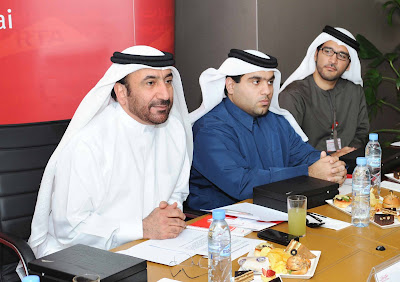 “RTA is keen to enhance the role of public transport in Dubai to ensure smooth and swift transit in accordance with the international standards. It is also seeking to press ahead with its consistent approach of adopting the best practices to uplift the class of services rendered to clients” said Al Mulla. He added: “Dubai provides plentiful and diverse services to the whole universe and is keen to excel and innovate in offering such services. Through its agencies, RTA is working towards broadening and upgrading the electronic and technical services provided to the public, such as the sterling services offered by Dubai Metro; the biggest public transport project undertaken by the RTA which is bound to enhance the global practices in rail transport” he said.

Al Mulla hailed the role of strategic partners in lending support to the strategic projects and initiatives made by the RTA with the aim of boosting the interaction between the RTA and the public and ultimately contributing to the vision of the RTA to provide Safe and Smooth Transport for All.

The meeting was attended by RTA Customer Council Members;, Peyman Younes Parham, Director of Marketing & Corporate Communication Dep’t, Omar Al Naqbi Manager of Development of Customer Relations, Nayelah Fikri, Director of Office of the CEO of Marine Agency, and Ramadan Abdullah, Director of Operation Dep’t at RTA Rail Agency. The meeting discussed several issues of common concern between the two parties such as the launch time, the design, the theme (my metro), the information related to metro operation, fare, services to the public, station services, mass transport integration, security & safety means, and job & investment opportunities created by the metro.

During the meeting a visual presentation of Dubai Metro was made depicting the swift and safe mobility of the metro across the Red and Green Lines extending 75 km, in a track that has elevated and underground parts and connecting 47 stations, making it the longest driverless metro line across the world.


The Council also discussed the anticipated services of the Metro project in accordance with the Strategic Plan 2020, as the metro will provide all means of comfort, recreation and services such as newspapers, magazines, personal items, and a cocktail of convenient stores. Discussions covered the opening of the Red Line in September 2009 and Green Line in March 2010, with 23,000 passengers per direction per hour served in the Red Line, and 18,000 passengers per direction per hour in the Green Line.

The Council discussed the Operational Plan of Dubai Metro Project including delivery of the best services to customers, operation timing, service hours, metro path, network length, number of passengers, and extent of benefits made to visitors & tourists. Several ideas and suggestions were made with a view to improving the services of Dubai Metro.

At the end of the meeting mementos were given to customers as thanks-giving from the RTA for attending and participating in the gathering. Customers in turn thanked RTA and lauded its relentless efforts to upgrade the level of services rendered to the public at the highest global standards applicable in the rail industry.