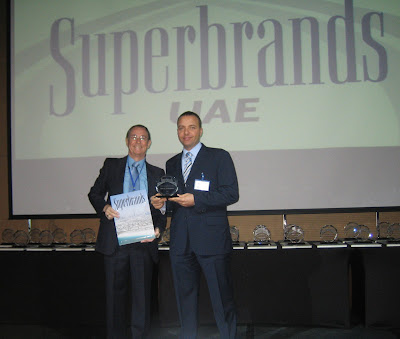 June 29, 2009
RAK Ceramics, the largest ceramic tiles & sanitaryware manufacturing company, has announced that it has been voted by the SuperBrand Council, the world's largest independent brand arbiter, as one of the UAE's SuperBrands for 2009. RAK Ceramics was presented an award during the SuperBrand Tribute event that was held yesterday (June 28, 2009) at the Al Ras Ballroom, Intercontinental Hotel, Dubai Festival City. The company will also be featured in an exclusive publication that will include all SuperBrands of 2009.

RAK Ceramics has been recognised for being one of the world's leading producers of a comprehensive line of premium-quality ceramic products. The company offers one of the industry's widest selection of colours, textures and finishes as well as an extensive array of coordinating trim and angle pieces, in line with RAK Ceramics' core values of excellence, fashion and trend-setting designs.

Dr. Khater Massaad, CEO, RAK Ceramics said: "Being named a SuperBrand is a very important milestone for RAK Ceramics, validating our company's genuine commitment to deliver high-quality and trend-setting ceramic products. This distinction has definitely inspired us to further raise the bar of excellence and consolidate our position as a global leader in the ceramics industry."

RAK Ceramics has firmly established itself as a premier ceramics brand within a short span of a little over 10 years. The company's top-quality products include world-class ceramic wall and floor tiles, Gres Porcellanato, and sanitary ware. With its latest distinction, RAK Ceramics joins the elite ranks of iconic brands such as IBM and Starbucks, which have all been conferred SuperBrand status in the UAE.

The SuperBrand Council consists of eminent personalities in the world of branding and seeks to pay tribute to established brands all over the world. The SuperBrand Council also produces various publications featuring the world's SuperBrands. Being voted a SuperBrand serves as a powerful endorsement and evidence for existing and potential customers, media, suppliers, investors and employees of a brand's exceptional status.

RAK Ceramics is a USD 800 million global conglomerate in the ceramic industry that exports its products to over 135 countries, targeting architects, project developers and retail customers. The company offers a perfect blend of technical finesse and aesthetics through thousands of designs in ceramic tiles, Gres Porcellanato, and several models in sanitary ware. RAK Ceramics has an installed capacity of 325,000 square meters per day for tiles and 12,000 pieces per day for sanitary wares globally. At its headquarters in Ras Al Khaimah it has 10 modern tile plants and two sanitaryware plants. The company has manufacturing subsidiaries in Bangladesh, Sudan, India and Iran, along with subsidiaries in Italy, Germany, Georgia, France, UK, Australia and Saudi Arabia. It has diversified into making products such as Adhesives & Grouts (Laticrete-RAK), Faucets (Kludi RAK), High end tableware (RAK Porcelain), Paints (RAK Paints) and a few other ventures.