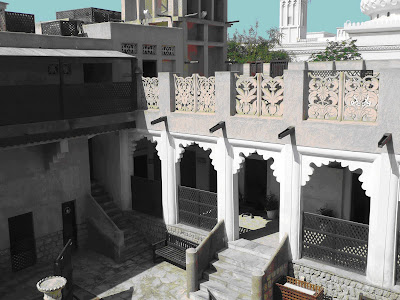 Dubai Municipality won the World Architecture Award at its fourth cycle of 2009 in recognition for the restoration project on the House of Scholar Mohammad Sharif in the Bastakiya. The Municipality won the award in the category of the Best Project that won the appreciation of the Honorary Committee.
Eng Rashad Bukhash, Director of Architectural Heritage Department said the restoration project of the House of Scholar Mohammad Sharif in the Bastakiya was a unique example in the restoration and preservation of historic buildings at the UAE level, which reflects the high sensitivity in dealing with such buildings while renovating.
"This was one of the best examples of the few remaining houses in Bastakiya and surrounding areas with rich traditional architecture and engineering, which has become one of the most important symbols of local architecture in the UAE.
The Architectural Heritage Department had restored the house in 1997 to make the building its office.

It is considered one of the groups of architectural buildings in the world with electronic data for the reference of architects from all countries of the world. The main task was to give opportunity for promotion of local practices recognized internationally and to provide a directory of contemporary architectural practices in all countries, as well as the opportunity to get acquainted with the latest theories in architecture.
Posted by Imre Solt at 5:01 PM