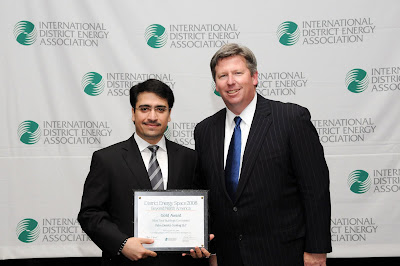 July19, 2009
Palm Utilities, a fully owned subsidiary of Istithmar World PJSC, a major investment holding company incorporated in the Dubai World Group, has announced that its subsidiary Palm District Cooling (PDC) has been recently named recipient of gold and silver awards in two categories of the International District Energy Association’s (IDEA) District Energy Space Awards 2009. PDC received the gold award in the Most Number of Buildings Serviced Beyond North America category, and the silver award in the Most Square Feet Serviced Beyond North America category.

District Energy Space is an annual publication of IDEA that features a compilation of buildings that have committed or recommitted to district energy service in North America and beyond. The Energy Space Awards 2009 highlighted benchmark quality standards and performance excellence of IDEA members in the district energy industry. PDC was recognised for servicing a total of 1,479 buildings in key residential areas in Dubai, the most outside North America, while the total area being covered by PDC's cooling solutions has reached more than 73 million square feet, the second biggest outside North America. The prominent residential developments that are availing of PDC's services include the Gardens Residential Complex, Jumeirah Island Villas, Discovery Gardens, Jumeirah Lakes Towers, Palm Jumeirah Crescent and Palm Jumeirah Trunk.

Shafiq Khoori, Managing Director, Palm District Cooling, who received the awards said, “These distinctions reflect Palm Utilities’ commitment to excellence and reinforce our position as an industry leader in the field of district cooling. Earning such a distinct recognition from an international organisation like International District Energy Association (IDEA) sends out the positive message of Palm District Cooling’s continuous drive for meeting and exceeding our stakeholders (and potential customers) expectations.”

“Moreover, the Gold and Silver awards motivates us to remain steadfast in our thrust to deliver long-term value to all our projects and to look towards more growth and expansion in the coming years,” Khoori added.

The Energy Space Awards aims to assist IDEA in determining growth and progress among its member companies and to act as a tool to spread awareness amongst the general public about the use and benefits of district energy.

Palm Utilities, through its two primary divisions of Palm District Cooling and Palm Water, has been established to address the region's unique requirements in the distinctly critical areas of cooling and water. With its aim of sustained long-term growth, Palm Utilities intends to pursue new core business activities within other utilities, including domestic gas, power distribution, sustainable energy and environmental waste management.
Posted by Imre Solt at 4:30 PM