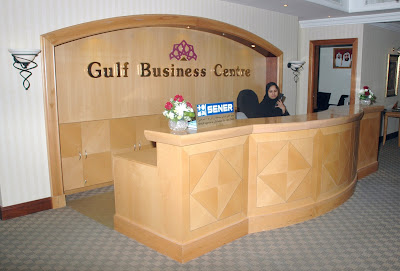 SENER Ingeniería y Sistemas, S.A. has opened a new office in Abu Dhabi, in the United Arab Emirates. This new office is located in the Gulf Business Centre district of downtown Abu Dhabi and will be SENER’s local headquarters to develop projects in the power and process sector, the civil engineering and architecture sector, as well as the aerospace sector.

SENER began to take an interest in the business opportunities available in the emirate of Abu Dhabi in 2007, when the company made its first contacts there. This led to the creation of Torresol Energy in March 2008. Torresol Energy is a joint venture between SENER and MASDAR ADFEC (Abu Dhabi Future Energy Company) with the mission to develop renewable energies and that was launched by the Abu Dhabi property investment company, MUBADALA Development Company. Since then, SENER’s activities in Abu Dhabi have grown due to the engineering opportunities available in the United Arab Emirates for the power sector and for civil engineering, architecture and aerospace projects, and the company has now opened an operational division in the city. SENER’s new local headquarters will support the company’s different Strategic Business Units as well as the rest of the divisions for all business opportunities that arise in the United Arab Emirates and its area of influence.

SENER is currently undertaking several solar projects in collaboration with MASDAR as a key technological partner at Torresol Energy’s plants. It is also taking a very active role in different power, civil engineering and architecture and aerospace engineering projects in the area.

About SENER
SENER is an engineering, consulting and systems integration company which is an international reference point in the areas of Aerospace and Civil Engineering and Architecture, Marine Engineering and Power and Process. It has a workforce of more than 2,400 employees and a turnover of more than 385 million Euros. At present it has offices in Madrid, Barcelona, Bilbao, Valencia, Seville, Abu Dhabi, Algiers, Buenos Aires, Lisbon, Mexico City, Okayama (Japan), San Francisco and Warsaw. SENER Ingeniería y Sistemas is part of the SENER Engineering Group, which employs over 5,700 people and has a turnover of 829 million Euros.
www.sener.es
Posted by Imre Solt at 6:03 PM