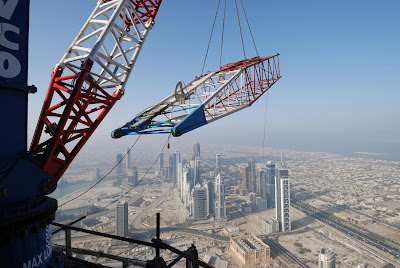 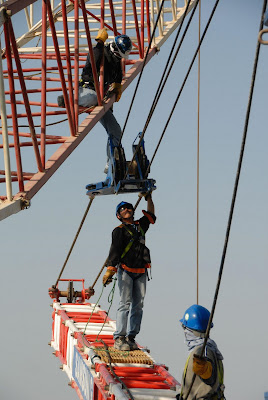 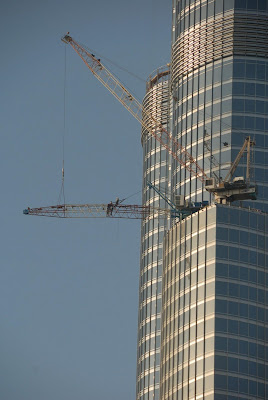 Dubai, UAE; November 10, 2009: Burj Dubai, the world’s tallest building, which is being developed by Emaar Properties PJSC, is nearing completion, following the dismantling of the last high-altitude crane used in the tower’s construction.

Having also completed the external cladding recently, the Burj Dubai construction team is now concentrating on the interiors and landscaping.

Mr. Mohamed Alabbar, Chairman, Emaar Properties PJSC, said: “The sheer size, scale and architectural detailing of Burj Dubai demanded an unprecedented degree of engineering innovation. Working at great heights involving the use of massive cranes has been one aspect of the challenge. Dismantling the cranes is an exciting development because it shows that completion of the world’s tallest tower is just around the corner.”

Three huge tower cranes were used in moving construction materials up to Level 156 of Burj Dubai. The cranes could each lift a staggering 25-tonne load and were designed to withstand 120km/hour winds.

In all, the three cranes lifted over 63,300 tonnes of steel reinforcement, and were operational for a total of 45,000 man-hours. A team of 35 skilled technicians manned the cranes, a critical component of the 11,000-strong workforce devoted to the construction of Burj Dubai, already a global icon.

The operators of the cranes worked at dizzying heights of more than 700 metres, almost double the height of the Empire State Building.

Mr. Abdullah Lahej, Executive Director, Dubai Project Management, Emaar Properties, said: “No high-rise construction project has moved the same volume of materials as Burj Dubai or to the same heights. The way tower cranes have been used to complete the world’s tallest tower is unprecedented and writes a new chapter in super-tall tower engineering.”

He said: “Managing the effects of wind speeds and the unique design challenges involved in realising the Burj Dubai’s slender structure was an extreme test. Each aspect of the construction was analysed to ensure maximum safety, efficiency and ease of operation – and the steady progress of the tower’s construction is a testament to the team’s exceptional commitment and abilities.”

Final work on interiors and landscaping is underway as the Burj Dubai prepares to open on January 4, 2010 to coincide with the Accession Day of His Highness Sheikh Mohammed Bin Rashid Al Maktoum, UAE Vice President & Prime Minister and Ruler of Dubai.
-ends-

Installation of the three tower cranes used for the construction of the higher levels of Burj Dubai was relatively straightforward, as sections of the cranes could be moved up the tower with the completion of new levels.

But as the tower grew in height, the floor plates and working area became smaller and smaller, providing insufficient room to fit the three cranes at the top of construction.

Dismantling the towers was considerably more complex than installing them. The first crane was removed in November 2007 and installed at Level 99 in order to serve as a future recovery crane.

For the next 11 months, the two remaining cranes continued their climb up the tower until October 2008 when one of them was removed due to the small size of the tower’s floor-plate. This left one final crane to continue with the rest of the exterior work.

In June 2009, the final crane had to be removed in order to allow the exterior cladding and finishing works to progress in the area it occupied. This longest serving crane had been in operation since the start of construction in March of 2005.

The process started with the crane climbing down from its working height of over 700 metres. The crane removed its own mast sections and lowered them to the ground until the boom and power pack were at the position of the Level 159 recovery crane.

From there, the Level 159 recovery crane dismantled the remainder of the main crane, lowering the pieces of boom, mast and power pack to the recovery crane at Level 99, which further lowered them to the ground.

The dismantling of the cranes at Burj Dubai is indeed a finely orchestrated set piece – except that the artists here were huge machines!


About Burj Dubai:
A mixed-use tower featuring the world’s first Armani Hotel Dubai and Armani Residences, alongside corporate suites, residences, retail and leisure facilities, Burj Dubai is at the centre of Downtown Burj Dubai, a 500-acre mega-development by Emaar Properties. Among an array of lifestyle amenities, the tower will have a public observation deck, At The Top, on level 124.


Burj Dubai has already achieved the distinction of being the world's tallest structure surpassing the KVLY-TV mast (628.8 metres; 2,063 ft) in North Dakota, USA. The tower is taller than Taipei 101 in Taiwan, which at 508 metres (1,667 ft) has held the tallest-building-in-the-world title since it opened in 2004. Burj Dubai also surpassed the 31-year-old record of CN Tower, which at 553.33 metres (1,815.5 ft) has been the world’s tallest free-standing structure on land since 1976.