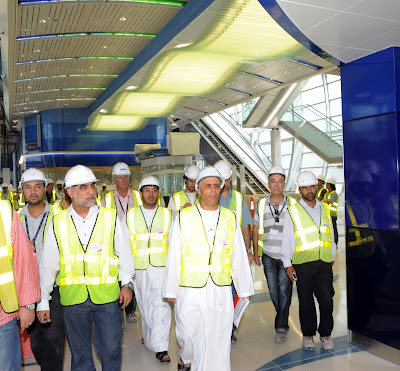 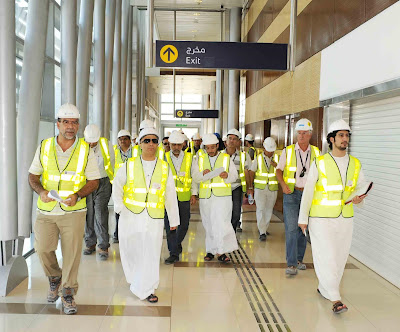 Roads and Transport Authority – Mohammed Al Munji:
H.E. Mattar Al Tayer, Chairman of the Board and Executive Director of Roads & Transport Authority (RTA) revealed that all construction works on the 19 stations on the Red Line of Dubai Metro have been completed, and that electromechanical works in the said stations range from 80 to 97%, adding that RTA is all set to phase out the opening of the stations in February 2010.
The announcement was made during an inspection visit made by Al Tayer that included the Command & Control Center at Rashidiya, and 10 other stations on the Red Line of Dubai Metro. During the tour Al Tayer was accompanied by the CEO of Rail Agency Abdul Majeed Al Khaja, Director of Rail Construction Dep’t Adnan Al Hamadi and several other directors and engineers overseeing the project.
Al Tayer set off his visit by inspecting the Command & Control Center at Rashidiya; which is one of the superior and most sophisticated control centers in the Middle East. Scheduled for inauguration in February 2010, the Center will enable full control of the daily operation of the metro service on both the Red and Green Lines.
The Center will be a hub for controlling, supervising and monitoring train movement and related systems through monitoring the performance of automated systems that govern the movement of trains, as well as the functioning of telecommunication systems, electrical transformers, and power feeders to both the rolling stock and the metro stations. It will also enable supervision of safety systems such as fire extinguishing and firefighting services, ventilation systems of tunnels, stations and trains, train air-conditioning systems as well as the safety of doors, brakes and engines on each train separately. The Center also provides a means of communication with train passengers through on board communications system fitted in the carriages and control room to be used in emergency conditions.
His Excellency Mattar Al Tayer then inspected Emirates Station, where electromechanical works completion rate has hit 90%. H.E. directed that work should commence expeditiously on construction of roads, bus stations and landscaping in the area surrounding the station. Continuing his tour, Al Tayer then visited the station of Terminal 1 of Dubai International Airport, the construction of which is funded by Dubai Civil Aviation Authority, according to an agreement signed in this regard between the RTA and Dubai Civil Aviation Authority. The Station, together with Terminal 3 Station, is considered a key station on the Red Line that serves a huge portion of passenger traffic from and to Dubai International Airport.
H.E. Chairman of the Board and Executive Director continued his inspection tour by visiting GGICO Metro Station at Garhoud area which serves a large number of schools in the area. Electrical and mechanical works completion is nearing 88% in the station. Then, Al Tayer inspected work progress at Karama Metro Station where electromechanical works completed have reached an advanced stage exceeding 95%.
This station serves highly densely populated areas and will, upon operation, contribute considerably to increasing the number of Dubai Metro ridership. The Station comprises a footbridge stretching 157 metres connecting the station to the two sides of Sheikh Khalifa bin Zayed Street.
H.E. Mattar Al Tayer then inspected Dubai World Trade Center Station where electrical and mechanical works have been completed. Pilot technical testing of the station is underway to ascertain its preparedness for operation. His Excellency directed work to be commenced immediately on the provision of sufficient parking for buses and taxis to serve the station users including those commuters who visit Dubai International Convention and Exhibition Centre which hosts over 60 international exhibitions annually spanning a wide range of sectors.
His Excellency also inspected work progress in Emirates Towers Metro Station in which completion rate is as high as 95%. Final touches are now being made on the station in preparation for the technical trial run. He also inspected work progress at Burj Dubai Station, which serves Burj Dubai; the world’s tallest building constructed in the heart of the most stunning structures on earth. Built as part of mixed use estate development in the Emirate, Burj Dubai comprises Dubai Mall, the largest shopping centre in the world, the “Old Town” and residential towers overlooking a man-made lake constructed as part of the project with a central “dancing fountain” considered to be the tallest and most beautiful of its kind in the world. Burj Dubai Station will be connected with passenger transport bus service from the Station to the Burj Dubai area and back.
H.E. Chairman of the Board and Executive Director continued his tour by inspecting work progress at the Al Qouz and Dubai Marina Stations, in which electromechanical works completion rate is 85%. He concluded his tour by inspecting Ibn Battuta Station with electromechanical works completion reaching 95%. He was briefed on the bus service provided by RTA Public Transport Agency to transport passengers from Ibn Battuta Mall to Nakheel Harbour & Tower Station and back. Regular service is provided for passengers shuttling between the station and the Mall.
In concluding his inspection tour, His Excellency Mattar Al Tayer expressed his delight with the progress of work in various project locations and commended the diligent & tireless efforts being made by the workers to complete the project. He called on the company carrying out the project to do more in order to complete to complete the job and get of all of the stations opened as scheduled.