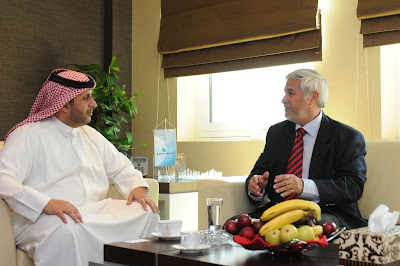 Bruno S Beijer briefed on Empower's projects in the UAE


Dubai, UAE, 23rd February, 2010: The Swedish Ambassador to the UAE, HE Bruno S Beijer, has said that the current situation offers tremendous potential for developing business tie ups between Dubai based companies such as Empower and Swedish technology vendors.

He said: “Empower played an instrumental role in Dubai's transformation towards a more sustainable 'green' society. We firmly believe that there is an obvious potential for collaboration between Empower and the many Swedish companies which focus on Environmental Technology. We hope this would lead to more mutually interesting business ties between Empower and the Swedish companies operating in Sweden or in Dubai.”

HE Beijer said: “I am really impressed with what Empower has done in such a record period of time. We discussed in the meeting the possibilities of further cooperation between Empower and the Swedish companies as far as the Swedish technical solutions are concerned.”

Dubai and Sweden has been enjoying cordial relations for several years, and the current time represents even more promising opportunities for mutual business and trade relations.

Bin Shafar said: “Empower always looks at solutions from world class companies and we believe that we need to have more joint ventures with top-notch organisations. Just a month ago, we inaugurated Empower-Logstor Insulated Pipes Systems (ELIPS), UAE's largest pre-insulated pipe manufacturing facility, in Jebel Ali. These moves not only signify UAE’s drive towards diversification of economy and it also reflects our search for partnerships with international companies.”

Dubai’s success in bringing fresh investments into the Emirate and its investment in new ventures was hailed by the Ambassador.

Bin Shafar said: “Dubai is setting the pace for sustainable building as the only place in the world where all new developments are required to adopt green-building practices. The Government of Dubai as per the directives of HH Sheikh Mohamed Bin Rashid Al Maktoum, UAE Vice President and Prime Minister and Ruler of Dubai, ensures that real estate developers create the “highest international standards” of sustainability.”

Environment reservation is always a priority in Dubai where the trend for green living and energy conservation was truly being embraced by individuals and companies alike. HH Sheikh Mohammed bin Rashid has prioritized sustainable development and this is where Empower is contributing.

Bin Shafar added: “We succeeded in building world class district cooling infrastructure that is considered an ideal economic and environmental solution for residential and commercial units, offices and hotels. In Dubai, residential units are becoming increasingly aware of the importance of using district cooling system as an alternative to conventional AC systems, leading to energy saving and environment conservation, as well as lower operations and maintenance costs. This is in sharp contrast to lower awareness of its importance in other parts of the Middle East.”

The operational savings percentage in a residential unit compared with conventional AC technologies ranges between 40 and 45 per cent which goes with the Dubai Strategic Plan 2015 which places major emphasis on the prudent use of resources to build a solid foundation forming a fertile environment for sustained growth.
Posted by Imre Solt at 5:10 PM