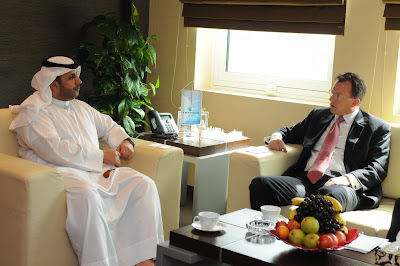 Bin Shafar, the head of the largest district cooling service provider in the region, said the UAE is one of the “Top places To Do Business” in the world and US businesses are actively taking part in the economic boom of the UAE on all fronts.
The American delegation praised the liberal business climate in the emirate of Dubai in particular and the UAE in general. Siberell described the emirate as an IT, tourism, trade and education hub for the entire region, thanks to the far-sighted vision of HH Sheikh Mohammed bin Rashid Al Maktoum, Vice-President and Prime Minister of the UAE and Ruler of Dubai.

The delegation agreed that Dubai was a success story with world-class infrastructure that includes ports, airports, roads and urban amenities. Bin Shafar said that the flood of foreign and domestic investment, efficient government spending and highly developed infrastructure have earned the Emirate economic competitiveness in the global market.

Bin Shafar added: “The UAE, the largest US trading partner in the Middle East, managed to transform its economy from a conventional, labor-intensive economy to one based on knowledge, technology and skilled labor and this is where companies like Empower fit it.”

“Empower has succeeded in building world class district cooling infrastructure that is considered an ideal economic and environmental solution for residential and commercial units, offices and hotels in the UAE. I am pleased to share with you that residential units are becoming increasingly aware of the importance of using district cooling system as an alternative to conventional AC systems, leading to energy saving and environment conservation.”

The Dubai based company tops the list of companies providing district cooling services in the region. It adopts a clear strategy to preserve environment through aggressively disseminating this technology and conducting campaigns to highlight its strategic value in the short and long run to the people and the society in general.

The meeting sought not only to promote US exports to the UAE, which is the Middle East’s booming trade hub, but also aimed to attract investment to the US from the UAE and strengthen two-way trade.

Among the most promising prospects for US Exports to the Middle East, according to the U.S. Department of Commerce, is in the area of Air Conditioning and Refrigeration Equipment, leading greater significance to the meeting between the US Consulate and Empower.
Posted by Imre Solt at 11:42 AM