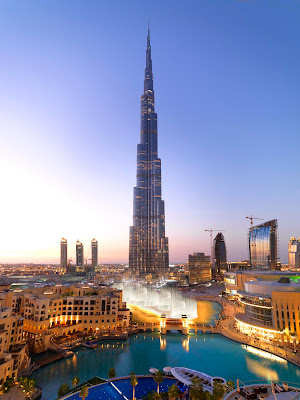 
Dubai, UAE; February 11, 2010: Highlighting its global footprint with the recent inauguration of Burj Khalifa, the world’s tallest building, Emaar Properties PJSC announced today its financial results for the 12 months ended December 31, 2009. Annual net operating profits for the period reached AED 2.324 billion (US$ 633 million), as compared to the restated net operating profits of AED 4.236 billion (US$ 1.153 billion) in 2008. Annual revenue for 2009 was AED 8.413 billion (US$ 2.290 billion) as compared to the restated revenue of AED 10.717 billion (US$ 2.918 billion) in 2008. The restatement of the 2008 profit and revenue relates to change in accounting method from percentage completion to completed contract method of revenue recognition in accordance with International Financial Reporting standards (IFRS).

Emaar has delivered approximately 3,100 units during 2009 as compared to 4,900 units in 2008. However, the revenues by Malls and Hospitality businesses increased significantly. The company implemented a number of customer oriented policies, which assisted in maintaining its Gross Profit Margins at 2008 levels. These policies also enabled customers to settle their obligations towards properties delivered, which is also positively reflected in the revenues of the Company.

In spite of opening two hotels during the year – The Address Dubai Mall and The Address Dubai Marina, the selling, general and administration expenses in 2009 were maintained at 2008 levels through implementation of appropriate cost control mechanisms.

Although, the profitability levels were maintained for the core businesses of Emaar, the net operating profit decreased due to provisions made by the Company’s associated companies in the Financial Sector, Amlak Finance and Dubai Bank towards their loans and advances portfolio. The Company also recorded lower fee income on property transfers due to discontinuance of such charges and lower net interest income due to utilization of cash resources to complete investment assets (Malls and Hospitality) during the year.

The robust performance for the Company during 2009 - a challenging year internationally - is a result of concerted effort by the Company to optimize resource use. Emaar also worked closely with all stakeholders to make the Company resilient and deliver results.

Emaar’s Hospitality and Mall subsidiaries were significant contributors to the company’s revenue stream, with the year witnessing the opening of two new hotels and the grand inauguration of The Dubai Mall, the world’s largest shopping centre, which attracted more than 37 million visitors in its first year of operation.

Overseas, Emaar projects in India, Egypt and Saudi Arabia, all reached advanced stages of completion and will be ready for handover this year.

Mr. Mohamed Alabbar, Chairman, Emaar Properties, said the company focused on the timely completion of existing projects across global markets through stronger resource optimization. “The crowning achievement in our track record of successful project management and delivery is the inauguration of Burj Khalifa. From delivering the world’s tallest building to the world’s largest shopping centre, and further strengthening our ability to build world-class communities such as Downtown Dubai, we have proved our commitment to delivery,” explained Mr. Alabbar.

Highlighting the success of Emaar’s diversified growth model, the company’s subsidiaries in hospitality & leisure and shopping malls & retail contributed to developing self-contained lifestyle communities in Dubai, which is also being rolled out in international markets.

“During an especially challenging period for economies across the globe, Emaar contributed to the socioeconomic growth and stability of Dubai by creating more than 12,500 new jobs through our subsidiaries. Domestic growth, catalysed by Burj Khalifa, will be the highlight of this year, as Emaar continues to focus on maximising long-term value for our shareholders,” said Mr. Alabbar.

He said that while Dubai will remain an integral part of the Emaar growth story, international markets and new businesses will also make considerable contributions. “The opening of Burj Khalifa has underscored the can-do ability of Dubai and is a testament to its sustained growth potential led by the vision of His Highness Sheikh Mohammed Bin Rashid Al Maktoum, UAE Vice President and Prime Minister and Ruler of Dubai.”

This year, Emaar will also focus on middle income housing as a strategic growth area to meet the growing demand for homes in emerging markets. According to recent estimates, demand for residential property in India will be over 7.5 million units by 2013 of which 85 per cent is projected in the mid and affordable housing segment – a trend observed in Egypt, Pakistan and other emerging markets too.

Global firsts
Emaar Properties made global headlines with the inauguration of Burj Khalifa, which at 828 metres (2,716.5 ft), is the world’s tallest building and manmade structure. At 200 storeys, including 160 habitable levels, Burj Khalifa anchors the 500-acre Downtown Dubai mega-development, which also features The Dubai Mall.

The Dubai Mall has 1,200 retail outlets, including a range of flagship stores and global brands represented nowhere else in the Middle East. At the mall’s entertainment precinct, Emaar has introduced the region’s first SEGA Republic, an indoor theme park developed in partnership with SEGA Corporation; and Dubai’s largest megaplex, the 22-screen Reel Cinemas. Emaar has also opened KidZania®, the region’s first-of-its-kind children’s edutainment centre.

In 2009, Emaar also unveiled The Dubai Fountain, the world’s tallest performing fountain, which attracts thousands of visitors every day.

International growth
In India, one of the company’s key growth markets, Emaar MGF Land Limited, the company’s joint venture in that country, has filed its Draft Red Herring Prospectus with the Securities and Exchange Board of India to enter the capital market with an initial public offering of AED 2.938 billion (INR38,500 million; US$830 million).

Emaar MGF Land Limited is also on course with the completion of the Commonwealth Games Village 2010, a residential complex set in 27.7 acres in Delhi with an estimated saleable area of 1.8 million sq feet.

Emaar has made considerable progress with its master-planned communities in India, Syria, Morocco, Jordan, Saudi Arabia and Egypt, with several hundred homes to be handed over this year.

With Tuscan Valley Houses in Turkey and Mirador Villas in Canyon Views in Pakistan, Emaar has already handed over its pioneering master-planned communities overseas – a trend that complements the company’s delivery track-record in Dubai.