AIRBUS MAKES ITS MARK ON DAY 3 OF DUBAI AIRSHOW 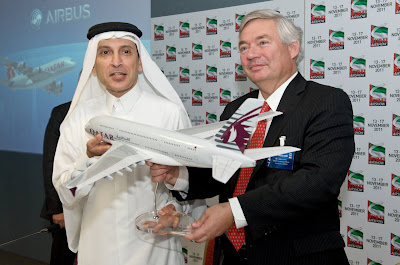 AIRBUS MAKES ITS MARK ON DAY 3 OF DUBAI AIRSHOW

Dubai, UAE. 15 November 2011 – The latter part of the third day of the Dubai Airshow saw the order book rev up to US$55.4 billion after some tough negotiations earlier in the day, with the Airbus A320neo the big winner.

Florida-based Spirit Airlines signed a Memorandum of Understanding (MoU) with Airbus for 75 Airbus A320 family jets – 45 A320neo (new engine option) and 30 A320 aircraft. The MoU should be converted into a firm order by the end of the year. The deal is valued at US$7 billion.

John Leahy, Airbus COO, Customers, said: “The unrivalled economics of these aircraft convinced Spirit to go all-Airbus and that decision has clearly paid off since for the airline.”

Qatar Airways, resolving its earlier differences with Airbus, signed an order for 50 A320neo aircraft and five A380 double-decker aircraft, with a total list price of US$6.4 billion. The Doha-based carrier, which has taken options on 30 additional A320neos, plus three additional A380s, will be the A320neo launch customer.

“The A320neo promises to be a great aircraft which is why we have chosen it to form the backbone of our future single aisle expansion,” said Akbar Al Baker, CEO of Qatar Airways.

Alison Weller, Managing Director of airshow organiser F&E Aerospace, said: “This year’s Dubai Airshow is certainly a successful one for Airbus, with orders for its new A320neo, bringing our order book total to $55.4 billion. Let’s see what’s in store for the next two days!”

Middle East Business Aviation (MEBA), from 11 to 13 December 2012, is organised on behalf of the Middle East Business Aviation Association (MEBAA) and brings together the world’s leading business aircraft manufacturers and industry suppliers. www.meba.aero
Delivering world class events for 50 years, F&E organises international trade events for business and consumers all over the world. It is a member of the Tarsus Group plc, which was founded, and listed on the London Stock Exchange, in 1998. With offices in the UK (London), USA (Milwaukee), France (Paris), Germany (Düsseldorf), China (Shanghai) and Turkey (Istanbul), the international business-to-business media group has interests in exhibitions, conferences, publishing and online media.
Posted by Imre Solt at 5:36 PM