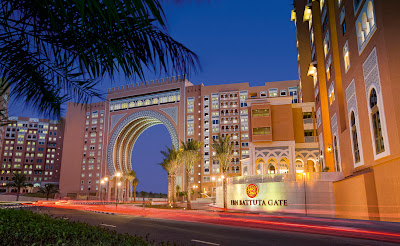 London calling for the Gate

Following the successful launch of its all-inclusive package earlier this year, the five-star Mövenpick-managed Ibn Battuta Gate Hotel Dubai will be extending its ‘all-in’ offer throughout the winter season until the end of April 2012.

Along with its sister property the Oceana Beach Club, on Palm Jumeirah, ‘The Gate’ is reopening reservations for its optional £ 47 supplement per person per night, (free for children under six and 50% for kids under 12). Normal restaurant menus apply, along with quality house and branded beverages. The ‘dine, sign and relax’ offer applies to advanced bed and breakfast bookings for four consecutive nights or more.

“The initial launch of our all-inclusive winter offer was a major success, with heavy demand from UK and German tour operators. The deadline for bookings passed recently and due to its popularity, we have decided to extend the offer until the end of April next year,“ said Andrew Hughes, Director of Sales and Marketing at the Ibn Battuta Gate Hotel.

“Some leading tour operators are now packaging this offer for as little as UKP899 per person, using Qatar Airways out of London Heathrow,” added Hughes.

The hotel announced the extension ahead of its participation at World Travel Market (WTM) exhibition in London which starts on 7th November. WTM is a key event for the international travel industry and attracts over 46,000 travel professionals from all over the world.

For an extra supplement of just €95 guests can also enjoy a lavish gala dinner on New Year’s Eve at the hotel’s main atrium; Al Bahou, an authentic example of traditional Arabic architecture.

The Ibn Battuta Gate Hotel is a comprehensive destination in itself, offering larger families the option of interconnecting rooms, a dedicated metro link and of course for those in need of some retail therapy, the extensive Ibn Battuta Mall is just next door.

As the global hospitality industry continues to ponder the pace of business, Mövenpick Hotels & Resorts, in partnership with real estate developer, Seven Tides, opens more than 1,200 rooms over four properties in Dubai, UAE.

The 396-room Ibn Battuta Gate Hotel, is cleverly inspired by the journeys of the 14th century Arabian explorer, Ibn Battuta himself. The hotel is located in ‘New Dubai’ opened its doors to business and leisure travellers in October 2010.

The 216-room Mövenpick Hotel Deira opened in January 2011. Situated in the commercial hub of Diera, close to the Dubai Creek and Dubai Airport, the hotel is perfectly situated for business visitors and short stay leisure guests as well as weekend shoppers and small meeting groups.

During winter 2011, the Asian-inspired Royal Amwaj Resort & Spa on Palm Jumeirah will be ready to open. The 293-room resort will be shortly be announcing some ‘industry firsts’, including an upscale all-inclusive package available through preferred travel partners.

2012 will also witness the opening of the contemporary Oceana Hotel & Spa. Seven Tides’ second property located on Dubai’s Palm Jumeirah will open 324 rooms at the Oceana Beach Club, which has already opened a popular restaurant-bar venue, West 14th, the New-York Grill and Bar. Both the club and the restaurant opened for business during the summer of 2010 and like the hotel are set to deliver great family entertainment.

Mövenpick Hotels & Resorts, an upscale hotel management company with over 12,000 employees, is represented in 30 countries with over 90 hotels existing or under construction. Focussing on expansion in its core markets of Europe, Africa, the Middle East and Asia, the international hotel group specialises in business and conference hotels, as well as holiday resorts. Of Swiss origin, Mövenpick Hotels & Resorts positions itself in the upscale segment and stands for quality, reliability and care with a personal touch. The hotel group is owned by Mövenpick Holding (66.7%) and the Kingdom Group (33.3%).

Meanwhile, established in Dubai in 2004, Seven Tides is an international-oriented holding company currently focusing on hospitality and real estate sectors.
Posted by Imre Solt at 1:02 PM