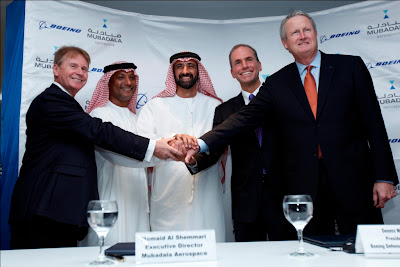 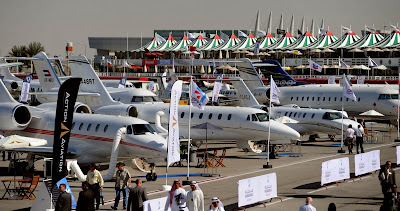 Dubai, UAE. 14 November 2011 – The second day of the Dubai Airshow was the day for Middle East companies to consolidate its growing importance across the aerospace industry.

Running until Thursday 17 November 2011 at the Airport Expo, the show has been decked out in the UAE national flag colours to celebrate the nation’s 40th anniversary in two weeks’ time on 2 December.

Oman Air signed an order for six Boeing 787-8s, completing an arrangement with Boeing and Kuwait-based leasing company ALAFCO to transfer existing orders for the six Dreamliners from ALAFCO to Oman Air. “Our decision to order the 787-8 is part of Oman Air’s long-term growth strategy to expand and modernise our fleet with newer, more fuel-efficient airplanes,” said Oman Air CEO Peter Hill. “We see direct benefits because of the Dreamliner’s fuel efficiency and operating economics as well as the enhanced travel experience that Oman Air will be able to offer its customers aboard this airplane.”

Another Mubadala company, Advanced Military Maintenance Repair & Overhaul Centre (AMMROC), announced a strategic agreement with Boeing Defense, Space & Security to provide support to military aviation platforms in the UAE, specifically the support infrastructure for the operational readiness of the UAE Armed Forces aircraft, including Boeing-built Apaches, Chinooks and C-17s in its fleet.

At an Airbus briefing, COO John Leahy said that the Middle East fleet will almost treble in the next 20 years, with 1,920 aircraft worth over US$347 billion required by 2030. “The Middle East remains one of the world’s most robust aviation regions and this is confirmed by a 200 percent increase in inter-regional passenger traffic over the last 10 years. The region is uniquely placed, with more than 85 percent of the world’s population within reach of the direct flight, making the Middle East a fertile market place for our eco-efficient aircraft today and beyond.”

This year’s Dubai Airshow is the biggest yet, with nearly 55,000 trade visitors expected over the week.

Alison Weller, Managing Director of airshow organiser F&E Aerospace, said: “The Dubai Airshow has proved itself this year as the platform for the region’s aerospace industry. Following on from yesterday’s fantastic order by Emirates Airline for 70 Boeing 777-300ER aircraft, worth US$26 billion, we now see Boeing’s latest aircraft the 787 Dreamliner being snapped up by Oman Air, with Mubadala Aerospace showing it’s significance in the industry as a Tier 1 supplier to Boeing.

“The Dubai Airshow, however, is not just about orders; its also a platform for building strategic alliances and developing relationships in order to further the aerospace industry in the region."

Delivering world class events for 50 years, F&E organises international trade events for business and consumers all over the world. It is a member of the Tarsus Group plc, which was founded, and listed on the London Stock Exchange, in 1998. With offices in the UK (London), USA (Milwaukee), France (Paris), Germany (Düsseldorf), China (Shanghai) and Turkey (Istanbul), the international business-to-business media group has interests in exhibitions, conferences, publishing and online media.
Posted by Imre Solt at 3:37 PM