THE US$63 BILLION DUBAI AIRSHOW CLOSES 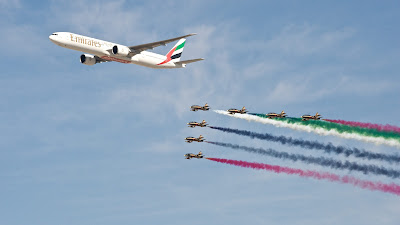 THE US$63 BILLION DUBAI AIRSHOW CLOSES

Dubai, UAE. 17 November 2011 – The Dubai Airshow closed its doors today on a successful week which saw US$63.3 billion worth of orders for aircraft, maintenance services and flight training programmes.

Visitor numbers broke the Dubai Airshow record with 56,548 people attending, making the 12th edition of the Dubai Airshow the biggest as well as the most colourful yet, as the halls, pavilions and chalets displayed the colours of the UAE national flag in celebration of the nation’s 40th anniversary in two weeks’ time on 2 December.

The theme of flight training which permeated this year’s Dubai Airshow continued on the final day with the signing by Fujairah Aviation Academy in the UAE with IATA, to develop the facility as an IATA-approved training centre for high school graduates.

The UAE’s 40th anniversary celebrations at the Dubai Airshow came to a climax as the country’s new aerobatic display team – Al Fursan – opened the aerial display with a fly-past with an Emirates Boeing 777 aircraft, proudly trailing the colours of UAE national flag to the delight of the crowd below.

Alison Weller, Managing Director of airshow organiser F&E Aerospace, said: “We promised a Dubai Airshow that would be bigger and better than ever and we did not disappoint. The past week has been notable for its buoyant crowds, spectacular aerial displays and astonishing order announcements. As the show comes to an end, it will be time to take stock of the successes and the challenges, in preparation for Dubai Airshow 2013 at Dubai World Central!”

Photo caption: The UAE’s Al Fursan aerobatic team executes a fly-past with an Emirates 777, trailing the colours of the UAE national flag, to celebrate the forthcoming 40th anniversary of the UAE on 2 December.

Middle East Business Aviation (MEBA), from 11 to 13 December 2012, is organised on behalf of the Middle East Business Aviation Association (MEBAA) and brings together the world’s leading business aircraft manufacturers and industry suppliers. www.meba.aero
Delivering world class events for 50 years, F&E organises international trade events for business and consumers all over the world. It is a member of the Tarsus Group plc, which was founded, and listed on the London Stock Exchange, in 1998. With offices in the UK (London), USA (Milwaukee), France (Paris), Germany (Düsseldorf), China (Shanghai) and Turkey (Istanbul), the international business-to-business media group has interests in exhibitions, conferences, publishing and online media.
Posted by Imre Solt at 4:28 PM