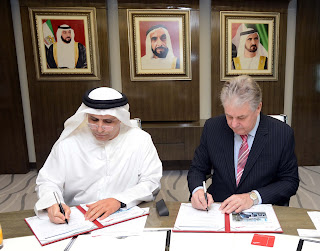 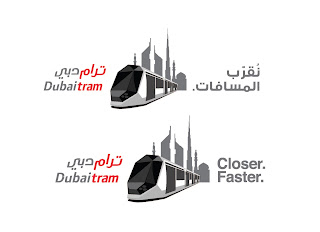 Dubai- Roads & Transport Authority – Nashwan Atta’ee:
The Roads and Transport Authority (RTA) signed yesterday a contract for the operation system of the Dubai Tram with the British Serco Company for a period of 75 months starting August 2013, including 15 months preparations for operation; covering the recruitment & training of employees in addition to 5 years of operation, and the total worth of the contract is AED105 million. The project contractor (Alstom-Besix consortium) will take on the maintenance of the project for 13 years and can be extended for additional 5 years.

The Agreement was signed for the RTA by H.E. Mattar Al Tayer, Chairman of the Board and Executive Director of the RTA and for Serco by H.E. David Campbell, CEO of Serco for Africa, Middle East, Asia and Australia in the presence of Abdul Mohsin Ibrahim CEO of Strategy & Corporate Governance Sector, Abdullah Al Madani CEO of Corporate Technical Support Services Sector and Abdullah Yousef Al Ali Acting CEO of Rail Agency as well as Zafar Raja CEO of Serco Middle East.
Al Tayer reaffirmed RTA’s unremitting commitment to effectively contribute to boosting the profile of Dubai as a modern metropolis that has all the ingredients of advancement and modernity, which includes deploying state-of-the-art mass transit means to make this vibrant city one of the fastest growing global cities at all fields and by all measurements.
“Serco has been selected for the operation of the Dubai Tram system following a tender put out by the RTA for which a bunch of world-class companies specialized in rail operation & maintenance have taken part.

Following the assessment of proposals submitted, Serco has been nominated for submitting the best offer, and the company has experience in operating and maintaining a number of metro and rail lines across Europe and Australia,” explained Al Tayer.
“As per the contract, the company will provide operation services for all assets of the tram system, and offer transit services to users at high-class standards tailored to the daily changes, besides protecting RTA’s assets, and operating the revenue system, and the collection of Nol cards selling & recharging proceeds. The company will also fully coordinate with both the construction contractor during the tests to be carried out in the pre-operation phase, and the maintenance contractor during the operation period. It will also attend to providing high safety levels for network users and cater to the full coordination and integration between the tram, metro and various transit means. The contract contains an article that provides for the commitment of Serco to transfer the workforce to the RTA, or any other entity selected by the RTA, upon the expiry of the contract,” he added.

“Tasking the operation and maintenance operations of the Dubai Tram to specialized world-class companies is attributed to a host of reasons highlighted by the fact that the operation of the tram warrants experience in scheduling the tram’s operational lines as well as host of sophisticated electronic, computerized and mechanical systems. The decision also underlines the need to minimize the operational costs of the tram through counting on the quality performance of private businesses, and depicts RTA’s keenness to provide top quality services at lower costs, besides freeing the RTA to focus on its core responsibilities of drafting legislations, overseeing the implementation and enforcing compliance therewith. Moreover, the privatization of tram and rail operation is practicable in a number of rail systems across the globe such as London, France, Australia, Korea, and the USA among others.

Highlighting the Project, Al Tayer said: "The Dubai Tram Project, which is being planned, designed and constructed pursuant to the directives of His Highness Sheikh Mohammed bin Rashid Al Maktoum, Vice-President and Prime Minister of the UAE and Ruler of Dubai, calling for the provision of a sophisticated transit system to serve Jumeirah Beach Residence, Marina and Al Sufouh districts, has witnessed an accelerated work tempo recently. The test run of the Tram was conducted in the facilities of Alstom Company in France, including various tests such as safety systems, electric propulsion system of the tram coaches, braking system, sudden stop during emergency cases, ground power feed of the tram track, overhead power feed in the Depot, and the tram’s doors operation mechanism. Once the trams start arriving in Dubai next December, the RTA will commission other trial tests on the test track and these tests will roll on till the official launch of the tram service in November 2014."
His Excellency David Campbell, CEO of Serco in Africa, Middle East, Asia and Australia, said that he had been absolutely excited to sign the Dubai Tram operation contract with the RTA, considering it an important step cementing the existing strategic partnership between the RTA and Serco, which operates the Dubai Metro Red & Green Lines since inception on 9/9/2009.

Campbell reiterated Serco's commitment to operate the Dubai Tram to the highest global standards of the industry, taking into account the need to boos international & prestigious standing of the Emirate of Dubai in providing mass transit modes, in addition to enhancing RTA's status and achievements made in a record time, placing Dubai at par with the world's advanced cities, despite the huge time lapse between Dubai and many advanced cosmopolitan cities, which had launched their transit network more than two hundred years ago.

The Dubai Tramway extends 14.6 km alongside Al Sufouh Road, and the initial Phase of the project envisages the construction of a 10.6 km-long track starting from the Dubai Marina and stretching up to the Tram Depot near Dubai Police Academy. The Tram network comprises 17 passenger stations, 11 of which are covered under Phase I and spread across activity and population density areas along the tramway. The fleet comprises 11 trams in the initial phase, and 14 trams will be added in Phase II to make a total of 25 operating trams. The tram is expected to lift about 27,000 riders per day at the start of operations in 2014, and the ridership is bound to hit 66,000 riders per day by 2020.

The Dubai Tram is considered the world's first tramway project powered by a ground-based electric supply system extending along the track, thus obviating the need for catenary cables. It is also the world's first tramway that uses Platform Screen Doors in passenger stations fully aligned with the tram's doors opening and shutting mechanism, providing maximum convenience, safety and security for passengers, and at the same time protecting the quality of the air-conditioning in the interior of both stations and carriages from external climatic conditions.

Each train measures 44 meters in length and has a capacity to accommodate about 300 riders. The Tram has a First Class (Gold Suite) and one cabin designated for ladies & children as well as a Silver Class cabin. The tram's carriages & stations will have deluxe interior finishing, and feature state-of-the-art technologies in the transmission and display of entertainment materials, with a passenger lounge of 44 meters.

The tram track basically extends at grade level along Al Sufouh Road but rises in an elevated section passing across certain parts of Dubai Marina due to the urban constructions in the locality. It links up with the Metro system at 2 stations, namely Dubai Marina and Jumeirah Lakes Towers via footbridges to facilitate the mobility and exchange of passengers between the two transit modes. The Tram will also be linked with the Monorail of The Palm Jumeirah at the entrance of the Palm from Al Sufouh Road to facilitate passenger movement between districts served by both modes.