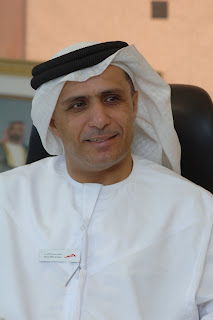 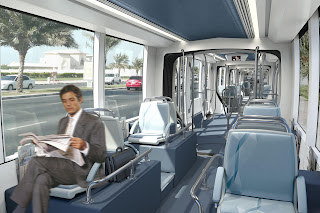 H.E. Mattar Al Tayer, Chairman of the Board and Executive Director of Roads & Transport Authority (RTA) announced that Alstom - Besix Consortium has started the preliminary works under Phase I of Al Sufouh Transit System Project. Such works included setting up the precast yard, digging trial trenches, carrying out topographical surveys and soil analysis of impacted sites.

“RTA has approved the initial design submissions prepared by the company for stations, which feature a unique diamond-shaped front-end design, internal layout of carriages, and the depot. Work in the Project is progressing according to the approved schedule and the consortium of the French Alstom, the Belgian Besix, the American Parsons and the French Sistra companies will start utilities diversions in preparation for commencing construction works.

“Sufouh Tram Project extends 14 km along Al Sufouh Road. Phase I envisages construction of a 9.5 km-long track starting from Dubai Marina up to Mall of the Emirates Station. The Tram network includes 19 passenger stations 9 of which are covered under Phase I and spread across activity and population density areas along the tram route. Each train measures 44 meters in length and has a loading capacity of about 300 passengers. The fleet will consist of 8 trams in Phase I and 17 more will be added in Phase II such that there will be a fleet of 25 trains in place capable of commuting about 5000 passengers per hour per direction.

“The tram track basically extends at the grade level along Al Sufouh Road but rises in an elevated section across certain areas of Dubai Marina, for reasons dictated by urban structures of the area. It passes in a path parallel to Dubai Metro Red Line and links up with the metro system in three stations along Sheikh Zayed Road where tram stations are linked via footbridges with metro stations to ease transit and exchange of passengers between the two modes. Sufouh Tram also links up with the Monorail of the Palm Jumeirah at the entrance of the Palm from Sufouh Road to facilitate passenger traffic between the areas served by both projects.

“The Project serves a residential and commercial area along the track of the tram in Al Sufouh, Dubai Marina and Jumeirah Beach Residence. These areas witnessed in recent years high-end urban development for residential, commercial and tourist purposes. They encompass prominent commercial and tourist landmarks such as Mall of the Emirates, Madinat Jumeirah and Burj Al Arab in addition to areas of high significance such as Knowledge Village, Dubai Media City and Dubai Internet City. Demographic studies of the project revealed that those areas have a population of about 180 thousands, 210 thousand workers and 20 thousand visitors. The high population and workers density reflects the importance of the tram project as an initial step in a chain of similar transport modes to cover all high density areas in the emirate.

Sufouh Transit System will be a new addition to the outstanding array of projects witnessed by the emirate of Dubai. The train comprises a First Class (Golden Suite), and another carriage dedicated to women and children in addition to a silver carriage. Carriages will have top class interior finishing at deluxe standards and will be fitted with the latest data transmitting and display systems. The train does not need overhead cables for power supply as it will be supplied with a modern and safe ground power cable system, and all stations will be fitted with central air-conditioning systems. Al Sufouh Transit System is the world’s first tram network that uses platform screen doors fully aligned with train door opening and shutting mechanism. This will provide maximum level of convenience, safety and security to passengers, and at the same time maintain the efficiency of air-conditioning quality at the interior of both stations and carriages from external climatic effects. Passenger platform extends 44 meters and is equipped with Automatic Fare Collections systems.