City of Dubai from the space at night, United Arab Emirates, September 28, 2009 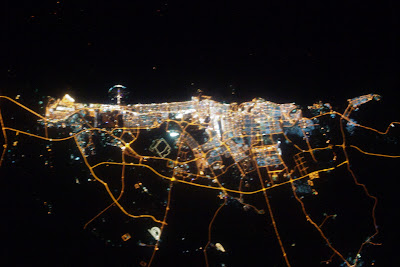 Astronaut photograph ISS020-E-39932 was acquired on September 11, 2009, with a Nikon D3 digital camera fitted with an 80 mm lens, and is provided by the ISS Crew Earth Observations experiment and Image Science & Analysis Laboratory, Johnson Space Center. The image was taken by the Expedition 20 crew. The image in this article has been cropped and enhanced to improve contrast. Lens artifacts have been removed.