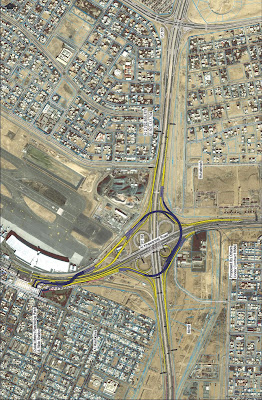 Roads & Transport Authority – Mohammed Al Munji:
H.E. Mattar Al Tayer, Chairman of the Board and Executive Director of Roads and Transport Authority (RTA), announced the opening of all bridges leading to the entry and exit points of the parking lot attached to Rashidiya Metro Station as of 09/09. The bridges opening, which is synchronized with the emirate’s celebration of Dubai Metro launch, will ease the traffic flow from and to the parking lot of Rashidiya metro station, which has a capacity to house 2700 vehicles.
Al Tayer stated that the project whose cost topped 698.9 million dirham included construction of directional ramps at the intersection of Emirates Road and Khawaneej Road, in addition to two bridges at Khawaneej Road, with a combined length of 2.5 km.
“This project has been undertaken as part of RTA drive to upgrade key roads network in the emirate and link them with the parking lots attached to metro stations. RTA is stepping up efforts to implement several road improvement projects, and widen key and arterial roads in the emirate as envisioned in RTA Strategic Plan over the next few years” said Al Tayer.
He added: “Rashidiya Station is a key station as it is the starting point of Dubai Metro Red Line. The station measures 130 meter in length and 30 meters in width, and has a capacity to handle 11,000 passengers per hour per direction. The Station has two entry points fitted with escalators and lifts to ensure smooth passenger traffic in & out of the Station, along with a parking lot to accommodate 2714 vehicles so as to lure motorists to use the metro in their mobility within the emirate of Dubai.
“The ground floor of the parking building is designated for feeder buses, and the design of the building has been customized to accommodate articulated and double-deck buses to ensure smooth bus traffic and the ability to handle several buses at a time. The building is also linked with a footbridge linking the other side of the road with the metro station such that it won’t take more than 3 minutes to walk from the farthest parking slot to the entry of the Station. The building has also been equipped with all safety requirements needed for passenger traffic within the parking lot.
“Undertaking such projects highlights RTA efforts to provide fast and smooth roads network for commuters to access Dubai Metro stations; which is part of the master plan to upgrade mass transit modes in the emirate and attract new riders, thereby ease road traffic congestions and raise the percentage of trips made by public transport modes from 6% to 30%. Such objective could only be realized with the provision of top quality mass transit modes at affordable cost and with a wide geographical coverage to compete with private vehicles. More efforts are also needed to raise the public awareness, orient the culture of using mass transportation of the community, and foster the integration with multi-modal transport such as public buses, Dubai Metro and marine transport” said Al Tayer in a final remark.
Caption:

• Layout of the bridges leading to Rashidiya Metro Station.
Posted by Imre Solt at 11:50 AM