Al Tayer receives the Hungarian ambassador to the UAE 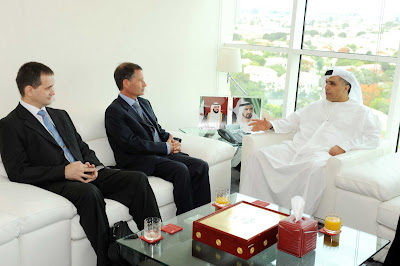 Al Tayer receives the Hungarian ambassador to the UAE

H.E. Mattar Al Tayer, Chairman of the Board and Executive Director of Roads & Transport Authority (RTA), received H.E. Dr. Yanoosh Ghontsi, the Hungarian Ambassador to the UAE. The meeting comes in the context of building and cementing the existing bilateral relations and boosting the ongoing cooperation at the local, regional and global levels. The meeting also discussed ways and means of exchanging expertise between the RTA and its counterpart in the Republic of Hungary.
Al Tayer briefed the Hungarian diplomat on the key projects currently undertaken by the RTA such as renovation and construction of several road projects, interchanges, Creek crossings, Dubai Metro, marine transport and public transport.

During the meeting Al Tayer said that RTA was committed to the best practices in every project phase in order to meet the intended objectives of providing Safe & Smooth Transport for All and accordingly showcase the profile of Dubai worldwide. “The UAE in general and Dubai in particular is witnessing massive developments that led to an influx of people and business that warranted providing the required infrastructure of road networks & various types of transportation modes, such as the metro, water transport, buses, and taxis among others, to cope with the phenomenal growth of population, projects and urbanization.

Al Tayer further added that he would be looking forward for Hungarian businesses to undertake RTA projects, notably in the field of roads construction. He cited that there were many giant projects in the filed of road networks and bridges in addition to mass transit modes; which need to be constructed to keep pace with the vast development drive across Dubai.

For his part H.E. Dr. Yanoosh Ghontsi, the Hungarian Ambassador to the UAE, hailed the mega projects carried out by the RTA; which were felt by all road users. “The UAE has made tremendous strides down the track of development and growth and has become an example to be emulated and a destination for many officials who intend to capitalize on its expertise in delivering giant projects and applying high technology in all fields” he continued.

The Hungarian Ambassador to the UAE added that he would be looking forward for bigger volume of trade and investment exchange between the two countries, and pinned hopes in seeing Hungarian companies taking part in projects offered by the UAE, notably Dubai Emirate in the field of road projects, and mass transit modes, particularly public buses and rail transport where the Hungarian companies and factories have tens of years of experience.