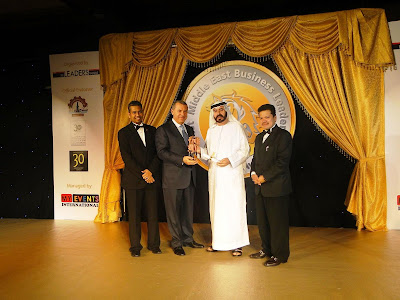 May 3, 2010
Dr. Khater Massaad, Chief Executive Officer of RAK Ceramics, the world's largest ceramics manufacturer, was presented with the Visionary CEO Award during the 1st Middle East Business Leaders Summit and Awards held on April 28 and 29, 2010 at the Intercontinental Hotel, Dubai Festival City. RAK Ceramics was also honoured with the Best Brand Award at the event, which recognises decades of business excellence and outstanding leadership.

Commenting on the awards, Dr. Massaad said: "This distinction is a tribute to the collective efforts of the entire team at RAK Ceramics, which remains focused on its commitment to manufacture products of the highest quality. RAK Ceramics has successfully maintained its reputation as the largest ceramics manufacturer in the world.”

“We take even greater pleasure in receiving the Best Brand Award for RAK Ceramics, which again reflects our continuing thrust to cultivate a culture of excellence and quality across all ceramic products," he added.

RAK Ceramics is a USD 1 billion global conglomerate in the ceramic industry that exports its products to over 150 countries, targeting architects, project developers and retail customers. RAK Ceramics has also been recently conferred the Superbrand 2010 Award and continues to be a global pioneer in the world of ceramics.
Posted by Imre Solt at 3:04 PM