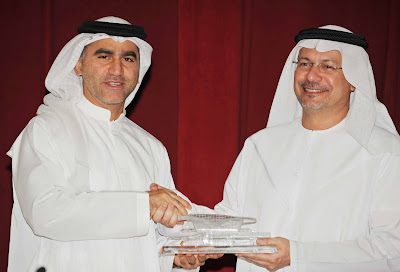 
Dubai – Roads & Transport Authority – Fahad Al Ma’amari:
The Roads & Transport Authority (RTA) announced that Noor Islamic Bank is granted the naming right of a Dubai Metro Station at Al Qouz, Sheikh Zayed Road, thus linking the bank with the Dubai Metro project; the iconic urbanized feature of Dubai and the engineering & technological contemporary masterpiece. An announcement to this effect was made in the press conference held at the premises of the RTA.

Abdul Mohsin stated that RTA contracted a 10-year period with Noor Islamic Bank, whereby the Noor Islamic Bank is granted the naming right of one of the Dubai Metro Stations at Al Qouz, along Sheikh Zayed Road. The Contract signals a new strategic partnership between the RTA and the Bank through the Naming Right of a Metro Station, which will be operated in mid May.

“The Naming Rights of the Dubai Metro Stations project is unique and unprecedented at the local and global levels that offer an ideal opportunity to cement the relationships between the RTA and the local & international establishments. The trademarks to name the metro stations in a way create a new and innovative platform for marketing and building brands” said Abdul Mohsin.

He added: “By giving Noor Islamic Bank a metro station naming right, the number of named stations under this project tops 21 stations along the Dubai Metro stations. This in turn reflects the flourishing economic activity in Dubai city, and proves the attractive nature of this investment model that offers a unique opportunity for branding and showcasing the profiles of businesses at the highest levels.
“The Metro Stations Naming Rights offers unique opportunities to businesses to boost their presence in one of the most dynamic and fastest growing ad markets; thus placing such companies on track towards enhancing and promoting their brands in the Emirate in the long run” continued Abdul Mohsin.

“Many chief executives and top marketing officials in local and international companies recognize that the metro stations naming rights scheme is a long-run branding partnership that will be going beyond the current global economic downturn” added the CEO of RTA Strategy & Corporate Governance Sector.
At the end of the press conference, the two parties exchanged mementos and posed for photos.
Posted by Imre Solt at 2:07 PM