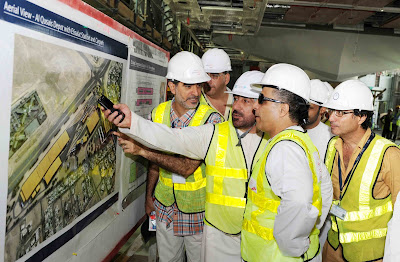 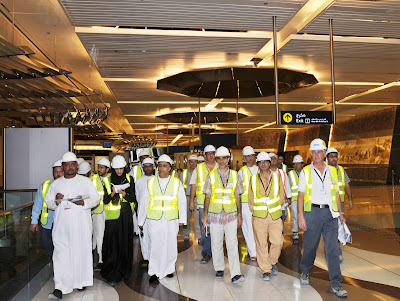 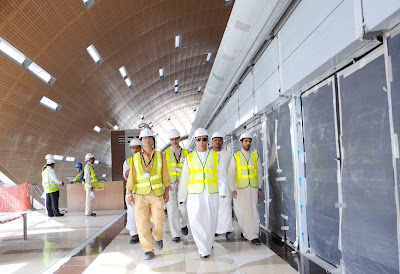 The project is set to open as planned in August 2011

H.E. Mattar Al Tayer, Chairman of the Board & Executive Director of the Roads & Transport Authority (RTA), announced that RTA had completed the construction works in most stations on the Green Line of the Dubai Metro, following the full completion of the 23-km long track extending along the Green Line. Completion rates in stations currently range from 55 to 100 percent in the finishing works, 65 to 85 percent in electromechanical works, and as high as 85% in the Park-and-Ride facilities at Al Qusais. He reiterated that work in the project is moving ahead on schedule and the project is set for opening in August 2010.

Al Tayer made these statements during an inspection tour of the work progress in the Green Line project of the Dubai Metro that took him to the Dubai Healthcare City, Al Ittihad, Al Ghubaiba, Al Ras, Al Qiyada, and Etisalat stations in addition to the multi-story car-parking building. Al Tayer was accompanied in the tour by the CEO of Rail Agency Adnan Al Hamadi, the Head of Follow-up Team of RTA Hosting UITP Congress 2011 in Dubai Mohammed Obaid Al Mulla, and a number of directors and engineers supervising the project.

Al Tayer set off his tour by inspecting the Dubai Healthcare City station where construction works have reached an advanced stage as the internal finishing works have almost reached 55 per cent and electromechanical works are as high as 65 per cent. Al Tayer then inspected the work progress in Al Ras and Al Ghubaiba stations where construction and civil works have been fully completed and so are the metal structures and platform doors. Completion of the finishing works in the two stations ranges from 55 to 70 per cent, whereas the completion of electromechanical works ranges from 65 to 75 per cent.

The two stations feature heritage designs depicting the history and legacy of the UAE. The design concept revolves around employing the architectural traditional elements used in antique buildings, such as wind towers (Brajeel), oriels (Mashrabia), alleyways (Sukaik), internal arches and others through replicating them in an enhanced manner, while addressing the aesthetic and technical dimensions of those elements such that the heritage-inspired stations would match the traditional Souks in the locality, look like a natural extension of the Heritage & Diving Village, and fit well with the antique control towers currently seen in the area.
Al Tayer then inspected the work progress in Al Ittihad Station; one of the stations in which the Red & Green Lines intersect and considered the world’s biggest metro station spanning an area of 25,000 square meters with a capacity to handle about 22,000 passengers per hour. The Station, which consists of two levels, extends 230 meters in length, 50 meters in width, and 18 meters in depth. It houses commercial & service outlets for serving metro users, and has two entry points equipped with lifts & escalators. Four tunnels branch out of the Station bound to Khalid bin Al Waleed & Al Rigga Stations on the Red Line, and Bani Yas & Salah Uddin Stations on the Green Line. Al Tayer attended to a briefing about the work progress in the station, where the contractor has completed all concrete works, and metal structures of platform screen doors and the completion rate has reached 70 per cent in the internal finishing works, and 85 per cent in the electromechanical works.
Al Tayer went about his tour to visit Al Qiyadah Station along Al Ittihad Road near the Dubai Police General HQ; one of the elevated stations of the Green Line that has a capacity to handle 11,000 passengers per hour in each direction with dimensions measuring about 130 m in length and 30 m in width. It has two ingress points fitted with escalators and lifts and the completion rate has reached 90 per cent in the construction works, 70 per cent in the finishing works and 75 per cent in the electromechanical works.

RTA Chairman of the Board and Executive Director concluded his tour by visiting Etisalat Station; the starting point of the Green Line where the Contractor has finalized all concrete works, metal structures of the station and the platform doors. Completion rate has reached 70 per cent in the finishing works, and 75% in the electromechanical works. He also inspected the multi-level Park-and-Ride facility where the completion rate in the parking lot, surrounding roads, bus station and footbridges is nearing 88 per cent. Al Tayer toured the building which has a capacity to house 2350 vehicles and meant to encourage the public to use the metro in their mobility across Dubai Emirate. The building has been designed to provide ample space for feeder buses of the station, ensure smooth traffic flow and accommodate huge number of buses at a time. It is also fitted with footbridges linking up with the opposite side of the road to ensure easy and safe access to the metro station, while providing the standard safety measures for passenger movement in the building.

At the end of the tour Al Tayer expressed his delight with the work progress in various locations of the project, and commended the efforts of all personnel working tirelessly to accomplish the project. However, he called on the contracting company to commit more efforts to ensure the opening of all stations on time.