An 11-hectare green oasis envelops the foot of Burj Dubai 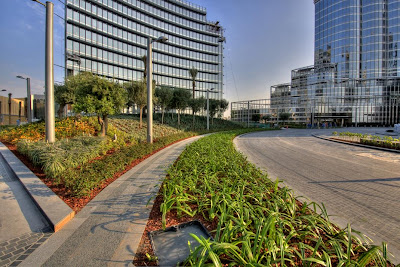 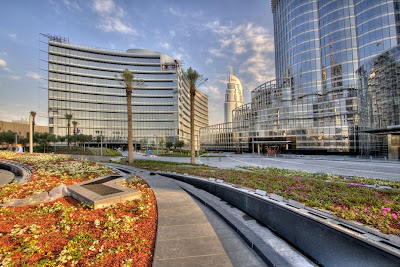 An 11-hectare green oasis envelops the foot of Burj Dubai

Burj Dubai, the world’s tallest building by Emaar Properties set to be inaugurated on January 4, 2010, stands tall amidst The Park, an 11-hectare green oasis that surrounds the foot of the tower. The Park has six spectacular water features, lush green gardens and colourful flowering trees.

Celebrating the theme ‘A Tower in a Park,’ the landscaping of Burj Dubai has distinct divisions that serve the tower’s hotel, residential, spa and corporate office areas. In addition to lush greenery, each of the entrances to the tower has its own special water feature adding to the visual beauty of The Park with its sound and effects.

Mr Mohamed Alabbar, Chairman, Emaar Properties, said: “The design of The Park is also inspired by the core design concepts of Burj Dubai, based on the symmetries of the desert flower, Hymenocalis, and regional motifs. The Park creates a soothing oasis of green, and is a logical extension to the Emaar Boulevard, envisaged as one of the world’s finest boulevards.”

At the core of The Park design is a ‘water room’ located at the base of the tower and defined by walls of dancing jets and pools. While the water experience continues to become a focal feature for the visitors at each of the entrances, closer to the lake side The Park has a series of large reflecting pools with the infinity edges that cascade and visually link to the lake.

Fountains, palm fringed walkways and flowering trees line the base with special entry roads leading to the hotel and residential arrival courts. Each walkway has an assorted mix of flowering trees, green shrubs and ground covers.

The site furnishings, including the railings, benches and signs, incorporate the abstract imagery of Burj Dubai’s design inspiration, the Hymenocalis. Tightly spaced double rows of date palms create shade and scale, and extend as a green colonnade towards the Emaar Boulevard.

The plants used for landscaping include a choice of evergreen ficuses and cassias. Royal Poincianas, with their trademark bright red blooms, decorate the centre of the tower base. Acacias, Yellow Elders and Chaste trees add to the shrub and ground cover. Splashes of bougainvillea, white coloured flowers, concentric hedges of Carissa, low growing vines, several exotic succulents including aloes and agaves add to the allure of the park.

The Park of Burj Dubai is a true reflection of the tower’s teamwork and marks another first of sorts in global collaboration. It is a collective effort of Skidmore Owings and Merrill (SOM), the Chicago-based architects who also designed Burj Dubai, and SWA Group in California. WET, the designers of The Dubai Fountain, the world’s tallest performing fountain, developed the park’s six water features.

Burj Dubai, a symbol of global collaboration, commitment and passion, stands tall at over 800 metres high and is located in the centre of Downtown Burj Dubai, described as the new heart of the city.

About Burj Dubai:
A mixed-use tower featuring the world’s first Armani Hotel Dubai and Armani Residences, alongside corporate suites, residences, retail and leisure facilities, Burj Dubai is at the centre of Downtown Burj Dubai, a 500-acre mega-development by Emaar Properties. Among an array of lifestyle amenities, the tower will have a public observation deck - At the Top, Dubai - on level 124.

At over 800 metres, the Burj Dubai has already achieved the distinction of being the world's tallest structure surpassing the KVLY-TV mast (628.8 metres; 2,063 ft) in North Dakota, USA. The tower is taller than Taipei 101 in Taiwan, which at 508 metres (1,667 ft) has held the tallest-building-in-the-world title since it opened in 2004. Burj Dubai also surpassed the 31-year-old record of CN Tower, which at 553.33 metres (1,815.5 ft) has been the world’s tallest free-standing structure on land since 1976.